This year was the first time in many years that I did not have a Poinsettia in my home starting sometime shortly before or after Thanksgiving.  I wanted to use this image for some of my Christmas cards, but I never got around to coloring one before Christmas so it will have to wait until next year to be used for that purpose. That said, I really love them and they always add a cozy feel to my home and I think they are a perfect cheery winter plant and found in a variety of colors from flaming red to nearly white and there are even some marbled varieties.  The "blooms" really aren't blooms at all and are instead leaves that have undergone a color change though photoperiodism. Simply stated, how much light and dark the plant is exposed to affects the color of the leaves.  Even the light from a vehicle passing or a television at night interferes with this process and impedes the transformation in color. The more uninterrupted night the plants have, the deeper the red leaves become.  At least 12 hours per day for 5 days in a row is needed to change the color.

Initially, Poinsettias looked like scraggly little weeds by the side of the road but were eventually cultivated to produce a bigger, bushier plant with all of the many variations of color we see today. The association of the plant (which is indigenous to Mexico) with Christmas began in 16th century Mexico and is said to symbolize the Star of Bethlehem and the red color the Crucifixion of Christ. The Poinsettia was introduced to the US in 1825 by the first Minister to Mexico, Joel Roberts Poinsett.

In 1900, a man name Albert Ecke emigrated to California from Germany and started a dairy and orchard and he sold the poinsettias from his street carts and became interested in them.  Albert's son, Paul, developed a grafting technique that produced the bushier plants we know today and until 1991 enjoyed a virtual monopoly of the Poinsettia Market. The wild or native version of these plants in Mexico have much slimmer leaves than the ones we enjoy today. As long as they are not exposed to frost, these plants can live outdoors year round. Betcha' didn't know you were going to get a little history and science on my blog today, did ya? *Ü*

I started with a 4.25 x 5.5 piece of Canson Bristol 96# Watercolor paper that had been stamped with the Stampendous Create-A-Poinsettia and heat embossed using Simon Says Stamp Ultra Fine Detail Gold Embossing Powder.  I like this image because it has the holly and mistletoe in the image. 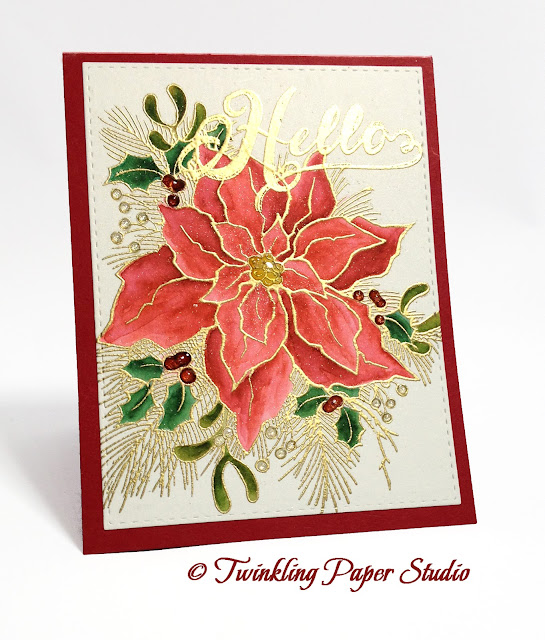 I water colored the poinsettia using Tim Holtz Distress Marker in Festive Berries with very little water to keep the red as vibrant as I could.  As in other watercolor, the depth of the red is increased by adding in additional layers of color.  I used Zig Clean Color Real Brush Pens in Deep Green and Olive for the greenery and Deep Red for the Holly Berries. For the Mistletoe Berries, I used Picket Fence Distress Marker, but ultimately I could have left them with no color on them.  It took a few layers to get the red watercolor how I wanted it. 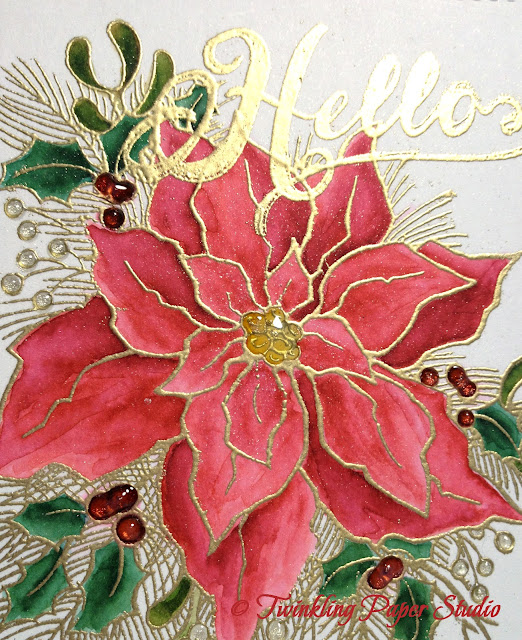 I decided to add the greeting after I had already cut the panel with the Simon Says Stamp Stitched Rectangle Die. As you may be able to tell, I nearly ruined the card when I accidentally shifted my acrylic block during the stamping.  I decided that it only looks bold and not really messed up so I went ahead and attached it to an A2 card base made from Simon Says Stamp Schoolhouse Red Card Stock. I added a watered down coat of Wink of Stella Clear Shimmer Pen to the berries, then topped them off with Glossy Accents. I added a stitched die cut to the inside of the card as well.  It's so hard to read anything on the darker card stocks and the white panel on the inside really fixes that.  I'm super happy with my finished piece.

Thanks for stopping by today and spending a few minutes on my blog.  I hope you all have a great day!
Posted by Vicki Finger at 4:26 PM