If you know me, it goes without saying that I am a big fan of bling on my cards. I've started using the WOW! Metallic Sparkle Embossing Powders quite a bit lately and I love them.  In fact, I need to get more to fill my containers a little fuller.  I wanted to make sure I liked it first so only ordered a small jar initially. "Like" would be an understatement.

I had pinned this card a few years ago from Pinterest that was made by Laurie Willison with the Papertrey Ink Mehndi Medallion Stamp Set. Mehndi refers to what we commonly call Henna.  I love this card and when I checked, they still had those in stock so I ordered one and I sat down to play with it a bit last night. 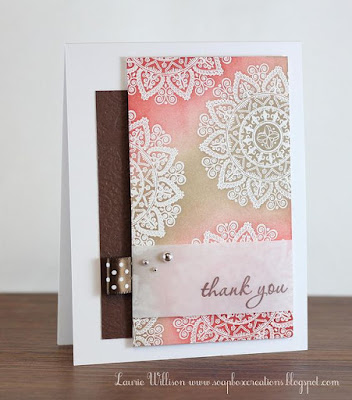 After studying Laurie's card for a minute, it was pretty clear that she had done ink blending on her panel although in her case I think she embossed first so it would resist the ink.  Since I planned to use a glittered embossing powder, I wanted to emboss last so I wouldn't knock all of the glitter off in the process of ink blending.  On a piece of Canson Bristol 96# Watercolor Paper, I used Simon Says Stamp Teeny Bikini and SU! Crumb Cake inks for my card front with my Ranger Mini Ink Blending Tool in a circular motion.  I inked up the center first using the Teeny Bikini and then went around the outside edge with Crumb Cake. Laurie actually used Tim Holtz Distress Inks to do hers, but I just used the inks I had in similar colors.  As long as they are a dye based ink and not pigment ink, this works.

After I had the ink blended the way I wanted to, I misted it with Tsukineko Sheer Shimmer Spritz and set it aside to dry before I did my embossing.  That makes the colors just kind of melt into each other for seamless blending or you can use plain water spritzed on there if you don't want the shimmer. After that dried I used my powder tool over the entire surface of the card to prevent any stray embossing powder particles.

This set has several sizes of these medallions in it and there is a Mini Mehndi Stamp Set that has matching/coordinating stamps in it. I stamped the medallions first then heat set them using WOW! Metallic Gold Sparkle Embossing Powder. Then I stamped my greeting which came from PTI's Graceful Greetings Stamp Set and heat embossed it with the same embossing powder. 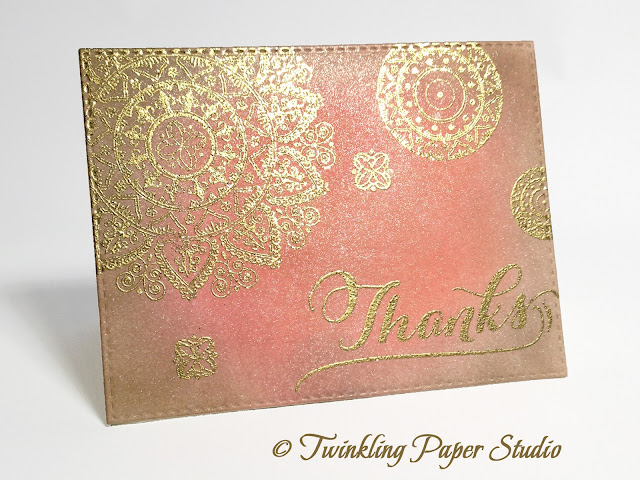 I cut that panel with the Simon Says Stamp Stitched Rectangle Die and adhered it to a top folding Ivory card base. Over all, this was a quick, simple card that is a single layer which is great for mailing.

I love the look of layers and my next project will probably have layers, but I have also come to appreciate the CAS (Clean & Simple) style as well for mailing purposes. Since I mail nearly all of the cards I make, that is important to me and this card proves that clean and simple doesn't have to be ugly! 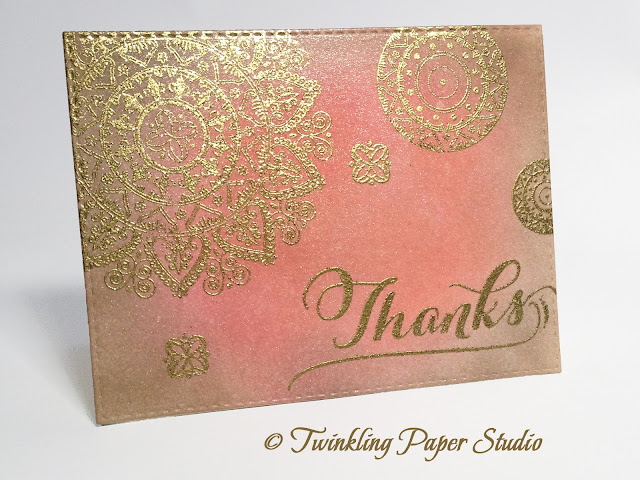 I'll be entering this card over on the Simon Says Stamp Wednesday Challenge Blog in the "Something New" category as I used a new stamp set.  I cherish each comment that is made here on my blog.  Thanks for stopping by and have a great day!
Posted by Vicki Finger at 10:20 AM