The Privilege of Being Your Friend

I am going to try to make this post as quick and painless as possible for both of us!  I couldn't seem to get my stuff together to pull this card together for a little girl's birthday.  I don't know what my deal was but I finally manged to pull it together and get it done so it can go out in the mail in the morning.  She's turning 9 on Saturday so I'm late getting this in the mail.  She was so excited the last time I sent her something as it was the first time she realized the mail had her name on it instead of her mom's.  I remember when that happened when I was little; do you?  I know, right?  It's the same reaction we have as we get real mail vs. junk mail now.

This is one of those things I do to honor the privilege of being someone's friend. I took my girlfriend's first family portrait in the Bluebonnet Field at Frito Lay when the birthday girl was just a few months old in 2007. This particular little girl lost her daddy on Mother's Day in 2013. He was riding his motorcycle the few miles home from work the previous evening and was struck by a car.  As I was thinking about this post tonight I found myself wondering if he knew in that instant before impact that he would never see his wife or his 3 little girls again. They were 2, 4 and 6 at the time.  He never regained consciousness, so there's no way to know.  I figure I can send his girls a birthday card to help take a little of the sting out of their daddy not being there on their special day anymore.

Fun is a little out of my comfort zone but I wanted to at least try to make a card that a 9 year old would think was fun.  A little pink, a little shine from the gold foil and a few hearts. Trust me when I tell you that my first attempt was perfect for a grown woman but all wrong for a little girl. I hope to do another post about that card a little later.

I went to Hobby Lobby yesterday to look for some Arches Watercolor Paper for the class I am taking next week.  I didn't have any luck with that as my local store only carries the very large single canvases but I did walk by a little pad of paper that happened to be 50% off this week.  I bought the larger 8.5 x 11 pad of this version before but what I noticed about this 6 x 6 size is that the design was scaled down appropriately so I went for it.  I think it will be great to have for quick cards although I don't seem to do much in my card making that is quick.

I messed with this print for a little while trying to figure out which direction it should go.  I cut this Papertrey Ink Center Stage Cover Plate Die using Melon Mambo Card Stock and used it horizontally to kind of create the "arrow" in the background.  I cut the patterned paper to the exact size I needed and so that the design would be upright. Using the same cover plate die, I ran that piece through my die cutting machine with the embossing pad so it would make the impression but wouldn't cut.  When you lay it underneath the top layer, it looks as if it's been inlaid, but with a lot less hassle. I assembled those two pieces using Ranger Multi Medium Matte. It was a lot easier than my first attempt which was to actually inlay all of those pieces. 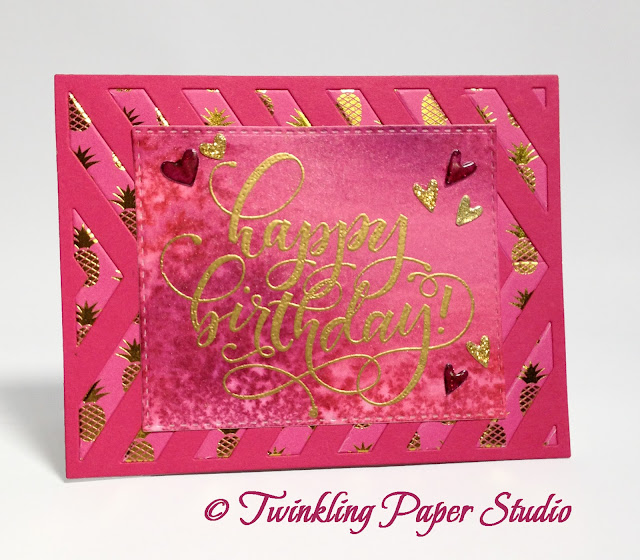 Next I inked up a piece of watercolor paper using Melon Mambo with a bit of Blackberry Bliss then spritzed it with a solution of Perfect Pearls.  That really softens and blends the colors.  I heat set that so I could go ahead and get my sentiment stamped.  This is from the Mama Elephant Birthday Wishes Stamp Set and is one of my favorites to use for a big bold look.  I stamped with Versamark and heat set it using WOW! Gold Rich Pale Embossing Powder then cut it with one of my stitched rectangles.  I added a little color to some of the scraps from the front panel then cut some little hearts from it.  I added those and a few gold glitter hearts from a previous project using Multi Medium Matte and finished putting my card together on a Whisper White A2 Card Base.  For the final touch I went over the darker pink hearts with a little Wink of Stella then all of the hearts with a coat of Glossy Accents and set it aside to dry.

I think I'm going to have to get a few birthday cards made up to have on hand. It's a lot easier than needing one and trying to come up with a design in a hurry which doesn't work well for me.

Now I need to dash off so I can get this in the mailbox but I'm so glad you stopped to spend a few minutes with me today.  I love comments if you'd care to leave one.
Posted by Vicki Finger at 10:12 PM