I wanted to get a couple of really quick cards in the mail tomorrow, so I sat down to work with only a few supplies; SU! Lost Lagoon & Whisper White Card Stocks, Whisper White Pigment Ink Pad and Cover Plate: Winter Floral Die.

I've had a little bit of trouble with getting this particular cover plate to cut all the way through so I wanted to spend a bit of time when I wasn't in a rush to get it done and figure out what I could do to get a better cut.  This die is so intricate and I didn't want to lose that detail.  I tried several things including the precision metal base plate, card stock shims of varying thicknesses and even plain paper shims.  It so happens that I have an older system of dies from Quickutz sitting in a few binders near my die cut machine and as I was thinking about how to solve my problem, I remembered that Quickutz used to include a shim with every die you purchased.

So I went to look at those shims and it occurred to me that even though the shim was for a 4 x 4 inch die, I had a nearly identical material right in my studio that I could use to make my own shim. I have a big roll of Scotch 3M Crystal Clear Packing Tape and this material is exactly like those shims I used to get.  The width of my roll is about 2 inches, so I put a strip down each side starting from the middle and then a second layer of that material down the center which is where it hasn't been cutting quite all the way through. Oh my goodness -- This worked fantastically well and I am so glad I thought of it. I'll tell you this though, it worked better on thinner 80# card stock as opposed to the thicker 100# or 110# card stock I normally like to use.  I just had to be careful not to tear anything, but it came away cleanly.  I could still poke out any pieces that were stuck in the die, I just had to poke through the tape the first time for any of the stragglers.

After that, it was easy to pull a couple of cards together.  One of these cards is going to Northeast Kansas where they have fresh snow on the ground so I just wanted a simple white overlay for a "Wintery" look.  Wink of Stella Clear Shimmer Pen over all the white continues that look.  It would have been a lot faster to use the Tsukineko Sheer Shimmer Spritz but I didn't remember to do that until after I had adhered the white die cut.  It took a little time, but it wasn't too bad since I really wanted to achieve the look of sparkling snow.  You can't see it in the photograph, but it's there. 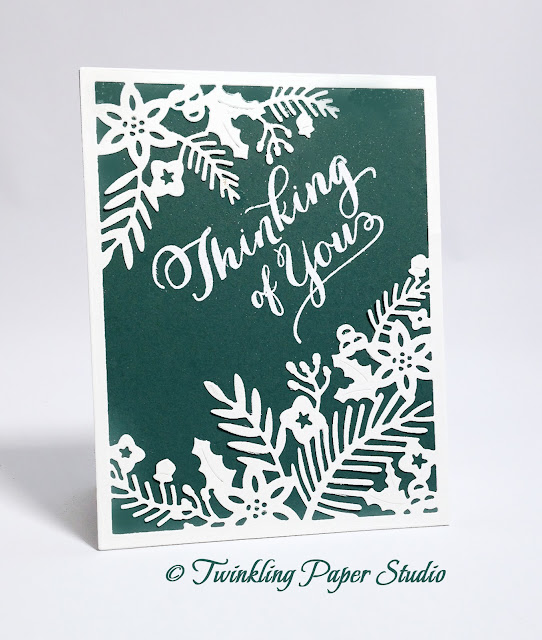 I stamped the greeting with Whisper White Pigment Ink and heat embossed it using Simon Says Stamp Fine Detail White Embossing Powder.  If you are trying to do a chalkboard technique, this Lost Lagoon card stock is the absolute perfect shade.  Papertrey Ink has a similar color called Ocean Tides.

Except for the time I spent figuring out a shim, this was a quick and easy card.  I have a few really intricate dies that I really struggle with getting clean cuts. They tend to be the ones that are fairly large with a lot of intricate details.  Now that I figured out how to help this one, I can go back to those other few and "fix" them up! 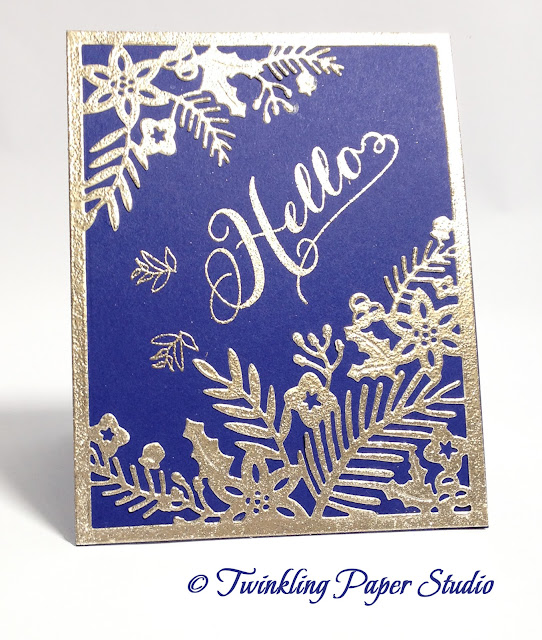 I created a second card quickly by inking up the Winter Floral Cover Plate die cut with Versamark and heat set it with WOW! Metallic Platinum Sparkle Embossing Powder.  Glitter paper would have been too much for this.  I put the die cut over my Night of Navy card base using temporary adhesive in just a couple of areas so that I could hold it in place long enough to stamp my greeting with a couple of little leafy stems from the same set.  I didn't want to warp the die cut, so I wanted to be able to remove it during the heat setting phase. I love this set of stamps called Graceful Greetings from Papertrey Ink and they have quickly become my favorites out of all the greetings I have. I attached both die cuts using Ranger Multi Medium Matte. I also adhered a white Stitched Rectangle panel on the inside of the card so I would have a place to write my note. The Simon Says Stamp Stitched Rectangle Dies are currently back in stock! 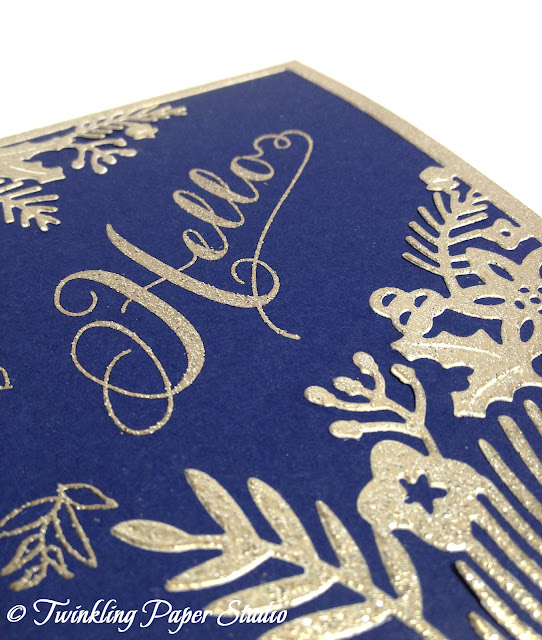 Thanks so much for stopping by today.  I will be getting to work on my next project for the Simon Says Stamp Monday Challenge Blog but I haven't posted for a couple of days so I wanted to get a post up this morning.  Have a great day everyone!