I have a few friends right now who are battling breast cancer and today's card is inspired by them in part.  I have several styles and colors of glitter in my crafting supplies.  I love shimmer and sparkle and I love adding those elements to my cards but glue and glitter can both be sooo messy. I was experimenting a bit yesterday afternoon with a product I hadn't used before, Stick It Adhesive Sheets. One of the really fantastic things about Stick-It it how easy it is to apply to a piece of card stock and also that it is incredibly thin.  If you've used any kind of score tape or double sided tape then you know it can sometimes be a thick little bubble of adhesive on the surface of an intricate die cut and glue is equally bad in small areas, sometimes squeezing out in between the layers of card stock and making a big mess. 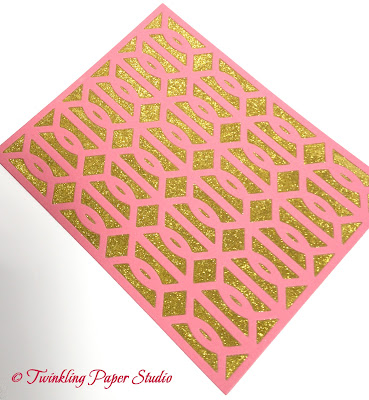 Stick It Adhesive Sheets have been around for a little over a year and were huge at CHA 2015 last January.  Having tried it out, I can certainly see what all the fuss is about.  Stick It is a micro fine, but very strong adhesive that has super thin silicone release paper on the front and back sides. Even with that, the whole sheet is as thin as a piece of inexpensive printer paper.  One of the really great things about it is that the release paper is incredibly easy to peel away making it a natural choice for intricate die cutting.  I was anxious to try this out with another technique, glitter inlay.  I cut my Paper Trey Ink Twist Cover Plate (A2 sized) from a piece of SU! Regal Rose Card stock.  Then I applied a piece of stick-it to a plain white card stock panel on the front side.  I removed the release paper from the front side and I carefully placed my die cut over the adhesive, sandwiching the adhesive layer in between.

I really like the Elizabeth Craft Silk Microfine Glitter that I had purchased when my local scrapbooking store went out of business last year, but I hadn't used it because - let's face it - glitter is just a bit of a pain.  I took a small spoon and used it to sprinkle Elizabeth Craft Solar Gold Glitter to the negative areas that were showing through and then burnished it using my bone folder.  This also prevents the glitter from "falling off". Since I was only using one color of glitter, I did all of this part over a sheet of printer paper so that I could tap any excess off my project and put it back in the jar for next time.  It doesn't take much glitter to fill in the negative spaces and I was left with this beautiful background.

This is gorgeous but definitely too glitzy for a guy card and really even for most of the women I know.  So decided that I would "sacrifice" the large piece by putting it behind another die cut panel to tone it down.  Papertrey Ink did a "Make It Monday" card and video similar to this that they called a "Window Screen Card".

I cut another panel of the Regal Rose Paper with the Simon Says Stamp Stitched Rectangle Dies using the largest one. Then I took the Heart Dies from Little B, making sure I also included the stitching detail which is a separate piece, and cut the window into the panel. I have several of the dies in this set held together with the stitching part using some Micropore Tape.  I've found that Micropore tape will mar the surface of my card stock, but for holding dies together for a single pass through the cutting machine, it is great and I just leave the tape on them when I put them away for the next time.  Putting adhesive all around the outside edge of that panel, I adhered it to the glittery panel and this left a beautiful glittered border all the way around the outside.  I lined up the center of the heart window to be in line with the center of the background. 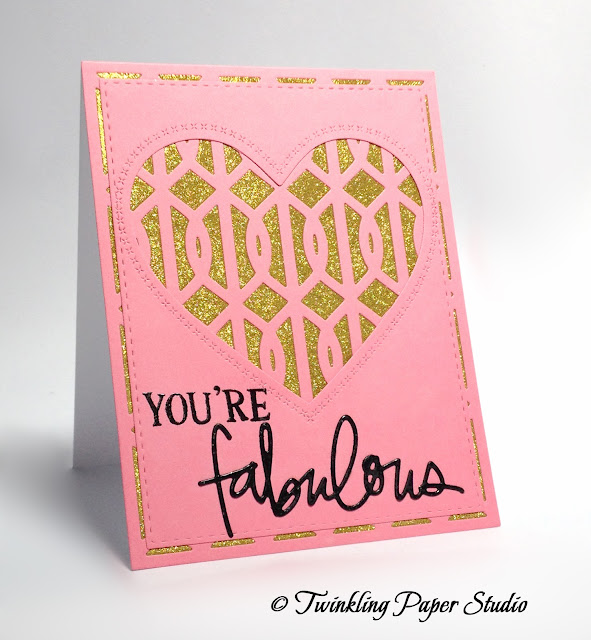 For my sentiment, I wanted something that would stand out from all of the glitter so that meant Bold Black.  I used the word "You're" from the Concord & 9th Being Classy Stamp Set and stamped it using Versafine Onyx Black Pigment Ink with Simon Says Stamp Fine Detail Clear Embossing Powder and heat set it. Next I cut the "Fabulous" from the Totally Fabulous by Julie die set that I received free from Ellen Hutson with my Black Friday order, out of black cardstock. I put that die cut down on my craft mat and inked it up with versamark and coated it with the same Simon Says Stamp Clear Embossing Powder.  This gives the die cut a little bit of dimension in the same sort of way that glossy accents does and also made it shiny like the first word.  I mounted everything to a 110# top folding white card base.

I'll be entering this card over at the Simon Says Stamp Monday Challenge Blog which is "Something New".

Thanks for stopping by today and I'll be back soon. In the meantime, by leaving a comment before 12:01 am on January 11, 2016, you have a chance to receive this card in the mail from me. I'll use a random number generator to select the recipient.  Have a great day!
Posted by Vicki Finger at 9:04 AM