Yesterday I decided to try something new to me so I whipped out a piece of watercolor paper that I cut down to 8.5 x 11 inches which is four times the size I normally work on.  I wanted to try a few new things and make something I could frame and hang in my studio.  I didn't want to go any larger than that to begin with as I thought it might be a bit overwhelming.

I started with a Simon Says Stamp Harlequin Stencil which is no longer available but there are some others out there.  I love Harlequin Diamonds, so I positioned my stencil on my watercolor base layer using a bit of micropore tape to secure it and used Ranger Transparent Matte Texture Paste with a Viva Decor Palette Knife to fill in the stencil.  Once I had it filled with a bit of texture, I quickly removed it and set it aside to dry for 10 minutes or so while I washed off my stencil and palette knife. Texture or embossing paste will harden on your tools, so don't wait to clean up until you are finished.  I keep Dawn Dish Soap and a scrub brush in the bathroom that is next to my studio for easy access.  It's also handy to have there in case you need to wash any of your photo polymer stamps to help restore the stickiness.

Next I cut out several of the Simon Says Stamp Clustered Leaves from Watercolor Card Stock and began inking those up using the Direct To Paper Method with Simon Says Stamp Beanstalk Green Ink.  Next, I added in some Garden Green ink to get both the lighter and darker shades.  Using my Finetec Mica Pigment Metallic Watercolors, I made lots of splatters on the leaves with the Arabic Gold color. That is the most yellow of the set and makes me think immediately of 18 Karat Gold which is quite a bit brighter than 14 Karat Gold.  I used to work in a jewelry store -- can you tell?  I have a couple of flat boxes that I have the flaps cut off of to make a shallow box for me to do any color sprays or that kind of thing in.  I found I was getting too much splatter on my desk just doing it kind of over my trash can, *wink*.  I set that box aside and went back to my base layer now that the texture paste was dry.

Using a Ranger Mini Ink Blending Tool I started randomly inking up my background with Simon Says Stamp Audrey Blue Ink.  I was concentrating that color near the center of the image to convey a blue sky in the background. Simon Says Stamp Thistle Ink was then added in somewhat selectively to sort of give the illusion of flowers out a window against the blue sky.  I actually don't really know if I achieved this result, but this was the impression I was trying to give by using the Harlequin Diamonds which always make me think of Tudor style windows.  Then came the Arabic Gold spatters on the background canvas. 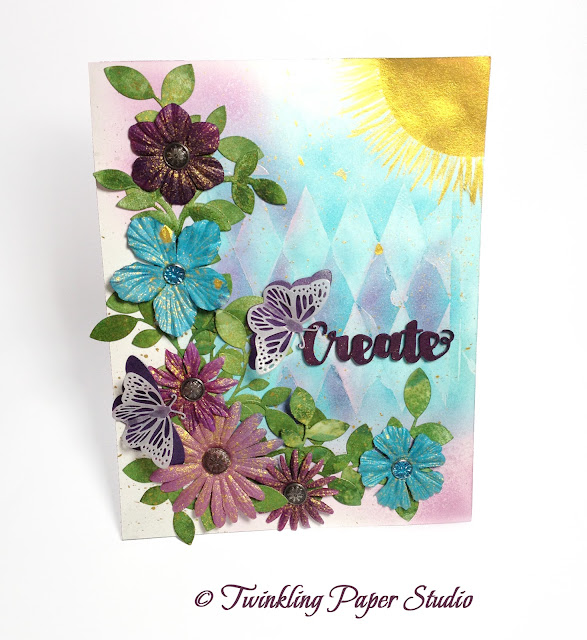 While that was drying, I grabbed some color mists that I had made using reinkers along with several sizes and styles of Prima Flowers.  I had purchased a white assortment several years ago called Botanical Mix that came in a tall acrylic container with several sizes and styles. I didn't know if I would ever use them all, but I nearly have by now. Using my other flat box I sprayed several of the flowers and set them aside to dry.  Once they were dry from the color sprays I carried the box to my work area to splatter them Arabic Gold Watercolor as well. The idea behind the gold spatters is to convey sunshine sparkling over everything in the garden....

I looked through all of my brads for the flower centers as buttons just didn't seem to suit this project and selected the ones you see in the project.  I don't have any idea what brand these are and they are several years old - maybe as many as 10 years old.

I wanted the scene to seem like it was a sunny garden so I cut a mask from a scrap piece of card stock and inked it in with some Simon Says Stamp Lemon Chiffon Ink.  In the end, I actually painted the sun with Arabic Gold.  In the Finetec Paints, it completely covers anything else including the ink I had used in that spot.  You can even use them on dark card stock and it will cover.

After that I sat down to arrange all of my elements on the background with how I thought I would be adhering them.  Once I had them how I wanted I used a piece of Press and Seal over the top to keep the arrangement in tact (mostly) so that I could reassemble it with my adhesive.  I used Ranger Multi Medium Matte, placing it on the stems and at the base of any leaves that seemed like they might be at risk for getting torn off.

I just kept working from upper left to lower right until I had my arrangement how I liked it.  For the final touches I added the butterflies made from vellum and eggplant colored card stock with a couple of glue dots and a skinny strip of 3D Foam tape under the body.  I cut the Simon Says Stamp Create Die 5 times and glued them one on top of the other for a very thick and substantial element then adhered that to the canvas using 3D foam tape.

I'll be entering this project over at the Simon Says Stamp Monday Challenge which is "Stencil It". I hope you enjoyed my "Out of the Box" project today and thanks for stopping by.
Posted by Vicki Finger at 9:41 AM