Today's card is one I've worked on for a few days.  It had to be just right for my oldest grandson who is getting married next weekend.  I really agonize over the cards I make for a particular occasion vs. just sending along a note card to someone.   I always want it to be just right for the person and the occasion.

For this card I started with a 5.5 x 8.5 card base scored and top folded at the 4.5 inches made from Bazzill Marshmallow which is a 100# card stock.  Next I stamped a Hero Arts Leafy Vines Stamp onto a panel of 4.25 x 5.5 inch Simon Says Stamp Audrey Blue with Versamark Ink and heat embossed it with Simon Says Stamp Ultra Fine Gold Detail Embossing Powder.  This is one of Simon Says Stamp's many exclusive 100# card stocks.  Being an Audrey Hepburn fan, I, of course, had to get this paper as well as a package of Surf Blue.  It was a bit tricky getting this image stamped and heat embossed but I did manage it on my first try which is always a good thing.  I put the cling stamp onto my largest acrylic block then flipped it over and took the paper to the stamp after I had inked it well. I like the Inkadinadoo Extra Large Block with the wavy sides to hold on to.   I was very careful not to move the paper but to press it down to make sure it was inked well. I carefully removed the paper from the stamp and put the embossing powder on it. Sometimes you can't tell how well you've done until you finish heat setting it. Next I cut that panel with the Simon Says Stamp Stitched Regtangles with the largest die in that set. 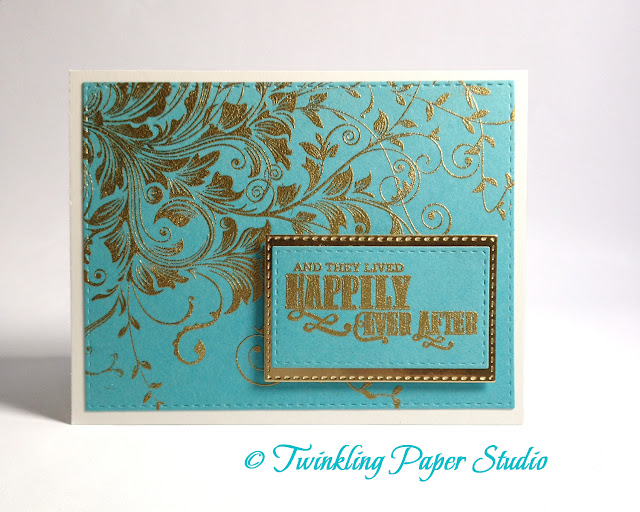 Next I used a sentiment from the Clearly Besotted Fairytale Ending Stamp Set for the greeting and heat embossed it in the same Simon Says Stamp Ultra Fine Gold Detail Embossing Powder.  I cut that with a smaller sized Stitched Rectangle then I cut a differently proportioned Memory Box Stitched Rectangle Die Set for the Gold Mat.  This gave me the look I was going for.  Once I had all of the components for the outside of the card done I started assembling it.  The largest panel was adhered using Tombow Mono Adhesive Permanent Tape Runner.   I used the same adhesive to attach the sentiment to the gold mat.  Next I used Foam Squares to pop that panel up just a bit on the card front.

One of the things I really like to do is to incorporate part of the invitation into the card I'm giving back.  In this case I cut the large heart from a part of the invitation that had their photo on it using the largest die from the Memory Box Stitched Hearts Die Set.  Next I used a stamp from the Simon Says Stamp Congratulations Set. This set was a part of the Simon Says Stamp May 2015 Card Kit.  I saw a card that one of my favorite Papercrafters, Debby Hughes of Lime Doodle Design, used way back when that card kit was announced and I loved the papers in that kit.  There's still a few of those kits left and the stamp set is also available separately.  I was glad I wasn't having to find something at the last minute.  I only had to figure out which part of those two stamp sets that I was using and where.

So for the inside of the card, I stamped the inside greeting in Versamark, and heat set using Simon's Gold Embossing Powder again.  Next I cut several hearts from the Simon Says Stamp Holiday Shapes - Hearts and Stars die and the Simon Says Stamp Large Holiday Shapes die set.  I like the variety of sizes offered in these two dies and I use them a lot!  If I have extras I just put them in my little container with the other bits of unused die cuts so they are ready if I need just a few when I'm working on cards.  I cut one set of the large die and three sets of the small die.  Those itty bitty little hearts are so cute!  I used Die Cuts with a View Glitzy Glitter Paper for the hearts and adhered them randomly using Ranger Multi Medium Matte. 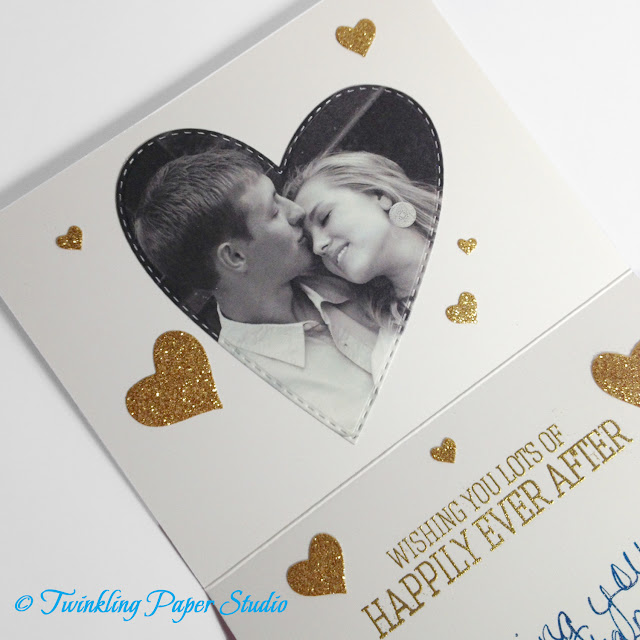 This card was not difficult but I did give it a lot of thought as to how I wanted it to all come together.  I hope they appreciate the hand made card as much as I treasure the scrapbook that Lance made me when he was 7 years old.  It's always on display in our home.

I always appreciate it when my blog readers or lookers take time to comment, so thanks to those of you who have done it!
Posted by Vicki Finger at 2:07 PM