A Couple of Clean and Simple Christmas Cards

This week's Simon Says Stamp Wednesday Challenge is Clean and Simple Christmas featuring Memory Box Products if you have any.  It so happens that I do.

In an effort to understand how each of my watercolor mediums move and work, I have lots of "experiments" laying on the table in my studio.  The one featured here used Eggplant and Night of Navy Stampin' Up Inks with some Tsukineko Shimmer Solution in it.  I was going for a night sky kind of look as far as color is concerned.  I actually wasn't too pleased with the colors initially. But in the interest of trying new techniques, I got out my Copic White Medium and spattered away with a few different sizes of Watercolor round brushes.  The largest one was a Size 6 Round and the smallest one was a Size 2 Script Brush. I'm pretty sure there are some Size 4 Round spatters as well.  I still didn't like what I had done, so I moved the pieces aside and went on with some other "experiments".  Eventually I moved on to other things in my home and came back the next day.  I immediately noticed that it had a snowy night sky look, so I've been saving these panels since this past spring to use on just such a card. Watercolor always looks different when it dries.

Using some American Crafts WOW Silver Glitter Paper, I cut this Memory Box Snowflake Love Pendant die.  I thought this would make such a nice holiday or winter-y card when I originally saw it.  For this card, I chose to let the snowflakes and the night sky conjure whatever images the recipient would associate with it and not use a greeting.  It could also be used in some reds for a Valentine's Day Card.  I have a water colored red and coral panel sitting on my work surface right now, waiting for me to get to it so I might have to give that suggestion a try sooner rather than later. *Grin* 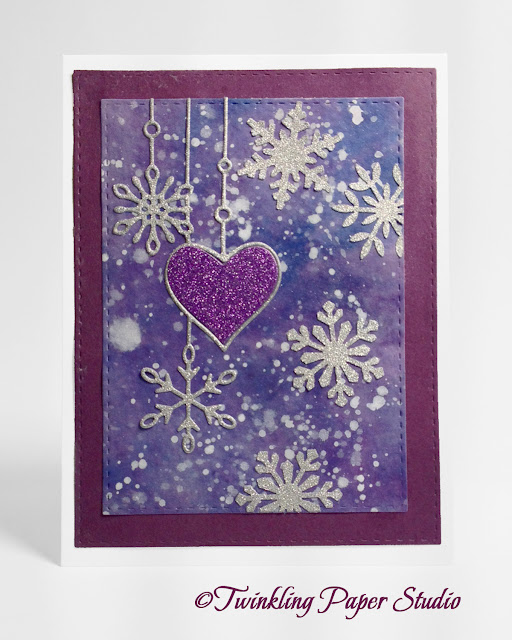 I kept the rest of the card simple using my Simon Says Stamp Stitched Rectangles Dies for the background mat and the front panel.  I used three different Martha Stewart Snowflake Punches including the Arctic Snowflake.  I don't know what the names of the other two are.  I adhered everything (including the watercolor panel) using Ranger Multi Medium Matte.  Sometimes my tape runner will pop up after a bit and a liquid adhesive doesn't do that.  I chose not to use any dimensional adhesive so my card would stay nice and flat for mailing.  I added a few sequins in the purple and magenta colors for a fun little accent as well as a purple glitter paper heart for the die cut inlay. 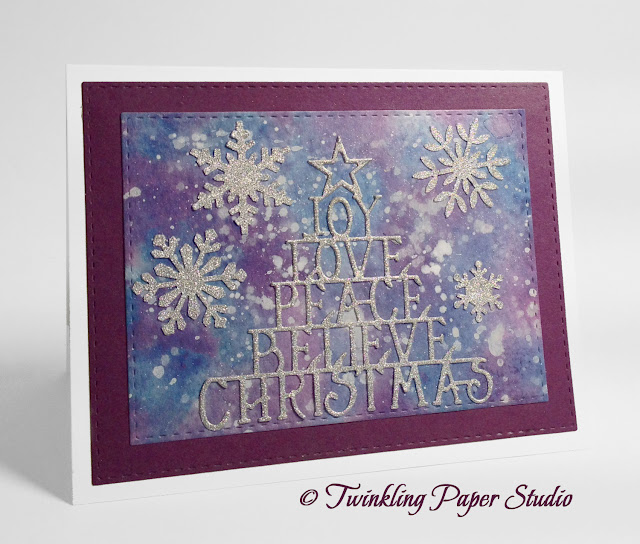 My second card repeats all of the first card except that I used a Penny Black Tree of Joy Thin Metal Die cut in the same silver glitter paper.  I've left off any further embellishments for now but I'm thinking I will add a few sequins on there as well.

Both of my card bases are made from Bazzill Marshmallow Card Stock with a top fold.  The mats are cut from Stampin' Up Rich Razzleberry Card Stock.

The glitter paper is some that I've had for quite some time but one thing I would note is that this glitter paper has a kind of plastic or vinyl backing on it and it was not very well suited to die cuts that are this intricate.  I have others with a regular paper backing that have cut much better.  I had already cut it and didn't want to waste it, so I did not start over.  I did have to run the dies through several times back and forth to be able to pull the pieces without tearing it.  I really love the American Crafts Glitter Paper because it doesn't lose any of it's glitter all over my table top.  I just need to remember to use it on less fussy die cuts.

Comments are always appreciated so let me know what you think!
Posted by Vicki Finger at 3:00 PM