The Simon Says Stamp Wednesday Challenge Blog has a "Tie it Up" challenge for this week.  One of their vendors, May Arts, makes twine and threads for use in cards & scrap booking.  I'll just confess to you all right now that I don't particularly care for the "messy thread on a card look", but I sucked it up and managed to get a tiny bit of iridescent thread on this card along with some pale blue sheer ribbon for this challenge.  It probably won't ever be my first choice, but I'm okay with what I have today.

I always like pale blues and purples for winter cards.  Just the very nature of the color makes it seem colder somehow.  You know-- they are "cool" vs "warm" colors.  I have been wanting a chance to play with some of my stamps and dies while I'm still trying to figure out my Christmas Card for this year and today was as good a day as any.  I've finally decided that I may have a large variety of different cards instead of mass producing just one card.  I don't have a MISTI, so that will suit my needs and my personality better.  I have trouble copying even one card so I really can't imagine doing 50 of them.

I had previously experimented with some paint spatters on card stock and I repeated that today using a soft blue card stock with some Copic White which is an opaque white paint that you can use with markers of the same brand, but I was trying to mimic snow.  That was okay, but still really wasn't the look I was going for.  In hindsight, I needed a smaller paint brush with longer bristles.  I'm going to have to go back later and try that now that I've thought of it.  I also tried several different embossing powders as well and this card uses Opaque White Embossing Powder from Judikins.  I used my the May 2015 Card Kit Stamp Set, "Congratulations", to make my snow.  One of the stamps in that kit is for confetti or champagne bubbles (I think) so I tried that for my snow.  I didn't have anything that was smaller for the background, so I went with what I had. 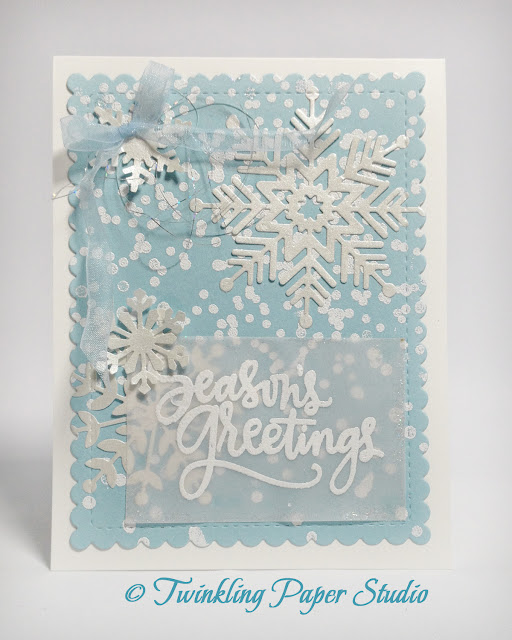 I was really wanting a bit of shimmer or sparkle to my snow, but none of the embossing powders I tried gave me the correct look, so I used the white in the end.  I'm actually thinking that I will mix a bit of clear embossing powder with some white and try that but I have no idea if that will actually work.  I've been saving an empty embossing powder jar to check, so I'll let you know in a future post. *Ü*

I always kind of agonize over the backgrounds for my cards, but once I get something that I like pretty well, then it's full speed ahead.  I have several snowflake dies and punches in a large variety of sizes that I have planned to use for winter or holiday cards.  There's Rylynn, Eliza, Alexis, & Kate which are all Simon Says Stamp Exclusive Dies. There's also three different Martha Stewart Snowflake Punches.  I figured I would have all the sizes and variety that I might need.  Two of the punches are Arctic and Alpine, but I have no idea what the third one is called.  I only used four total on this card and two of them are the small punch sized snowflakes.

I stamped the sentiment from Big Scripty Greetings - Holiday, in Versamark on 40# vellum and heat embossed it.  I also put Versamark all around the edge of the vellum and heat embossed it with Iridescent Sparkle Embossing Powder from Judikins.  I had already tried Diamond Sparkle, and Ranger Holographic Embossing Powders.  I attached the greeting and the snowflakes using Ranger Multi Medium Matte.  The Multi Medium dries to a matte finish and doesn't show under vellum although I do try to place it behind other elements.  I dotted that adhesive all up and down the top, bottom and sides of the greeting panel and it doesn't show anywhere.  For the very last snowflake I put on the card front, I tucked a bit of iridescent thread under the center and attached it to the upper left corner of my front panel.  After that I tied the small sheer blue bow and put that on with a glue dot.  Multi Medium Matte would have worked fine, but I didn't have to babysit a glue dot.

Once I achieved the snowy background I wanted, the rest of the card went very fast.  I die cut the background using the Scalloped Stitched Rectangle from the Sunshine Layers Dies by WPLUS9 Design Studio. The snowflakes are all cut from White Shimmer Card Stock.  I have a few variations on this theme that I'll be trying over the next couple of weeks and I'll post those as I complete them.

Thanks so much for looking.  I hope you have a great day!

PS:  I just went back and tried the Copic White Paint with a small scoop of Perfect Pearls in it, making spatters with a #2 Script Brush.  This works very well. You can control the size of your spatters by how near or far the tip of the brush is to your paper.  I actually did my spatters onto my paper over my trash can to try to keep the mess contained.  You could use a box or some old newspapers as well.  The blue card stock is two different colors, but I like the effect in both cases. 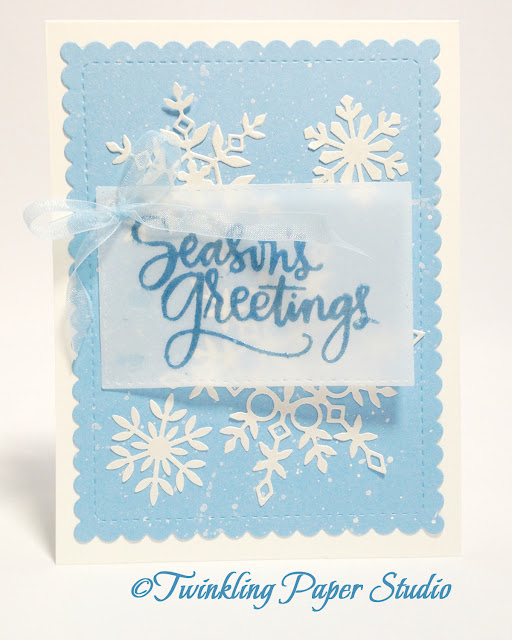