A Flurry of Flakes

I sat down in my studio yesterday for only a few hours.  The night before I had made snow speckles on some light purple paper, so I knew that I would be able to assemble 4 cards in pretty short order. I made the "snow" using Copic White with some water and Perfect Pearls Pigment Powder in it.  Using a #2 Script Brush, I tapped it firmly above my paper until it resembled snowfall. Then I walked away for the evening so it would have a chance to dry.

When I returned last night I set about making my actual cards.  I had several different parts of the cards ready to go.  The background panels were already cut, the greetings heat embossed, the bows tied, snowflakes cut, etc.  Technically, I should have been able to make 4 identical cards, but I just don't seem to be able to do that even though I had all the same ingredients sitting on my table ready to go.  It's okay though! My cards are handmade, not Hallmark so each one is going to be just a bit different than the previous one.  That makes them more special.

Three of these cards use the "messy thread" technique although mine is not too messy.  I made a special trip in to town yesterday to buy a spool of gold thread and one of silver.  Now when I say "in to town", I just happen to live outside of the city limits and in a different county than the zip code my address belongs to.   This definitely has some advantages.  But, Walmart in town is only 5 miles away - literally!   I found a couple of other things to buy as well.  Who knew you could get a 4 inch tall container of glass seed beads at Walmart for $1.47.  I picked up two of those also; one in silver and one in gold.  I plan to try making a shaker card later this weekend and these will be great for that.  Not to mention that I can make at least 25 cards using each color with the amount of beads I got and I don't have to feel bad about the few cents it cost me to do it.  Plus, there was the confetti in iridescent and silver.  Those two colors will work with about any color of shaker card I might want to make.  I would feel bad if I paid much money for a technique that might not work, so this way there are no worries. 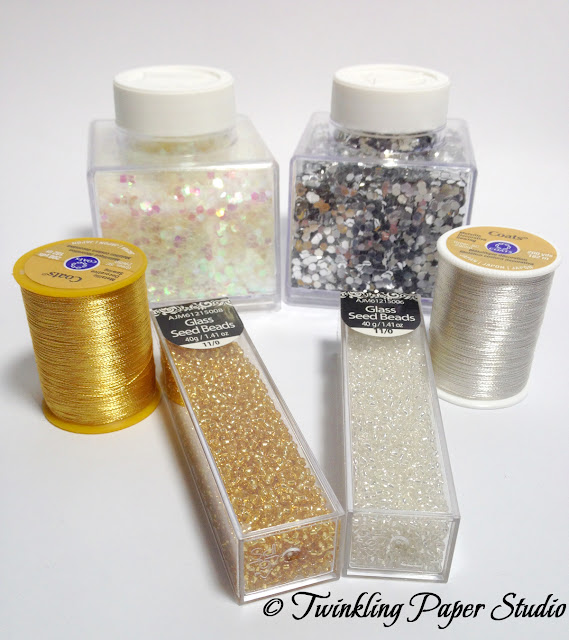 Anyway, I got off track for a bit there, but I found a few things more than just the thread I was going for.

So now I have better quality thread than I did previously for the Tie-It-Up Challenge over at Simon Says Stamp's Wednesday Challenge.  I did actually like this thread much better than the other one I already had that was iridescent. This new thread is silkier and just seemed nicer over all.  It is shiny as well, which just makes it seem more festive.  And the big plus is that it is much easier to handle. 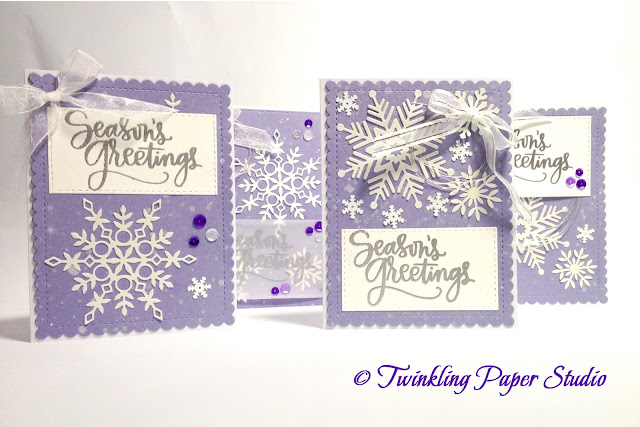 These cards are pretty straight forward.  I have yards and yards of ribbon here, so I just had to hunt for the ones I wanted to use.  The background panels were die cut using the WPLUS9 Sunshine Layers Die.  I used the same snowflake dies that I did previously which are Simon Says Stamp Exclusive Snowflake Dies called Rylynn, Eliza, Kate and Alexis along with the Martha Stewart Punches I have in Alpine, Himalayan, and Glacial.  Simon's Nadine and Kinley snowflake dies are on my wish list.  They have a good variety of snowflake dies and several bundles as well that contain a variety of sizes.

All of the greetings were heat embossed with Judikins Fine Detail Silver Embossing Powder which melts faster than any other embossing powder I have.   I have learned to let my heat tool warm up for about 20 seconds before I take it to my paper which decreases the amount of warping on vellum.  I also have a bit of Simon Says Stamp Silver Embossing Powder which embosses nicely too.

After assembling the cards, I gave each one some sequins in clear and purple or I also had some snowflake sequins.   The purple paper I used is called Wisteria Wonder and it came from Stampin' Up!  When I run out, I am going to get the Simon Says Stamp Lavender Card Stock.

I have no idea what I am going to work on for the rest of the day, but I'll tell you all about it when I figure it out.  Have a great Saturday, everyone and thanks for stopping by.   Please feel free to leave a comment as I always love that!