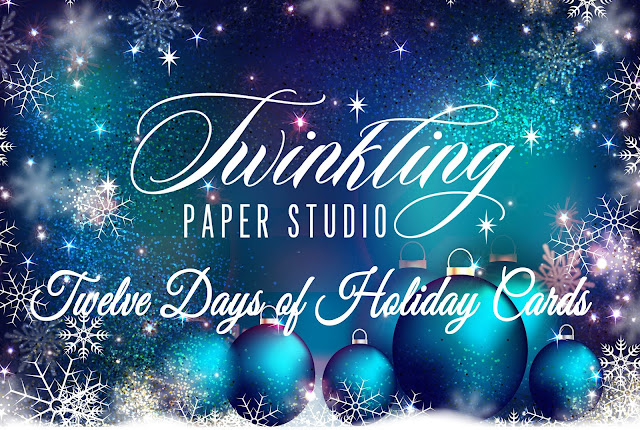 Hello and welcome to Day Five of the Twelve Days of Holiday Cards!  This is my first year doing a series and I'll just share with you that is is a somewhat daunting task to blog every day!  I probably wouldn't make it if I still had kids at home, so be sure to leave some blog love when you visit other folks' blogs and I hope you'll leave some for me as well!  If you do, then you'll be entered into the drawings for that day's winner.  All the winners will be posted on November 30th.

Today's post is doing double duty as I am also up on the Memory Box Blog today.  Comments there won't count toward today's giveaway, so be sure to comment here for your chance to win! 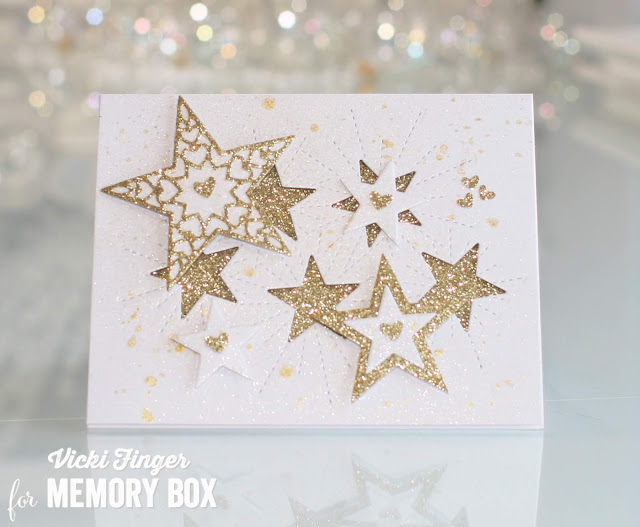 I was not sure what to create for today's card, so as I often do when I don't have a set project in mind, I grabbed a few dies that I've been wanting to work with and sat down to see what happened when I played around a bit.  This card is a bit more complex, so I'll have a few pictures along the way to show you as well as tell you how I came up with this card. 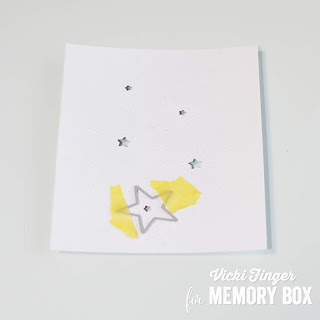 Starting with a panel of Cougar Super Smooth Digital White Cardstock, I used the Starry Burst Die to cut and emboss the panel.  As you can see in the photo on the left, this cuts very small stars from the center of the bursts.  Because I also wanted to combine it with one of the Stars from the most recent Holiday Release, I took the smallest die from the Shining Star Die Set and centering it carefully over each burst, I die cut these star openings to be larger.  I like to use Frog Tape for Delicate Surfaces.  A lot of folks like to use Washi Tape, but in my experience, it tears my paper every time.  I find Purple Tape to be too expensive for as much die cutting as I do. My roll is about an inch wide, so I tear off a piece and then tear that piece in half longways. Plus I can use the same piece about 20 times before I have to replace it.  As you can see, I'm not using too much at once.  I bought my roll about 3 years ago and still have more than half of it left.  It's easy to find on Amazon.

So I have five larger star openings after I die cut all of the stars in this way onto my panel.  I misted it all over with some clear shimmer mist and some gold shimmer mist, both from Imagine Crafts.  To create dimension, I put foam tape all over the backside, including all four sides and all the spaces in-between so it wouldn't sag in the middle. I added a gold glitter panel behind the stars which gave it instant dimension.

Next, I started playing with the Holiday Heart Star and the middle-sized Shining Star Die to see if I wanted white to be the top or bottom layer.  I liked the white for the bottom layer, so I went all over the white star piece with my Spectrum Noir Shimmer Pen.  This is quick and less messy than misting all over although that has never stopped me. *Ü*  Thankfully I have a large piece of glass that sits on top of and is slightly bigger than my craft mat which is 18 x 24, so I keep rubbing alcohol in a spray bottle for quick clean up.  Then I die cut the top layer using the Holiday Heart Star in Gold Glitter Cardstock. 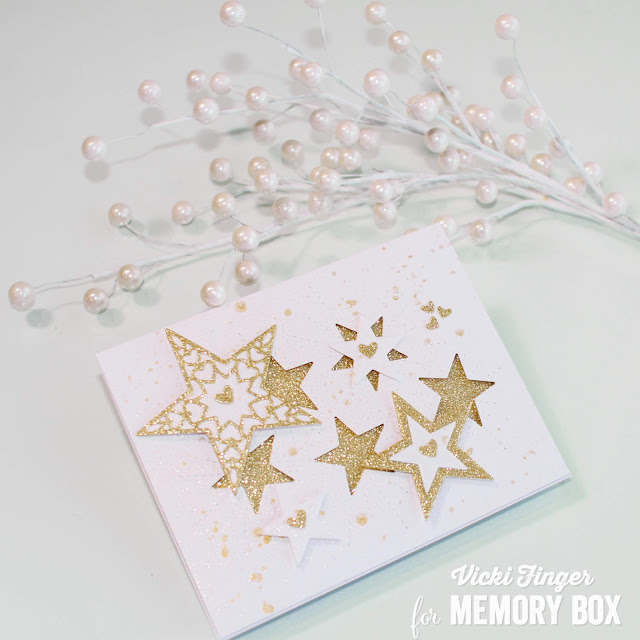 I love to take the fun little bits and pieces from the dies, which in this case are the little hearts, and see if I can find a way to use them on my card or another card.  I added one of the little hearts to the center opening of the Holiday Heart Star.  I still had lots of little hearts left so I cut a few more of the white stars in the smallest size and one of the next size up from the same Gold Glitter.  I adhered a heart in the center of each star and to one of those, I added that third layer of gold glitter on one of the white stars.  The Crystal Katana Tool is very handy for this.

Next, I figured out the placement I wanted to use for this card and placed a double thickness of foam tape behind each one of them.  The upper right-hand star actually sits down in the opening of that star so it doesn't pop up as much as the others.  I played around until I had a placement I liked while not covering up too much of the background stars and embossing detail. 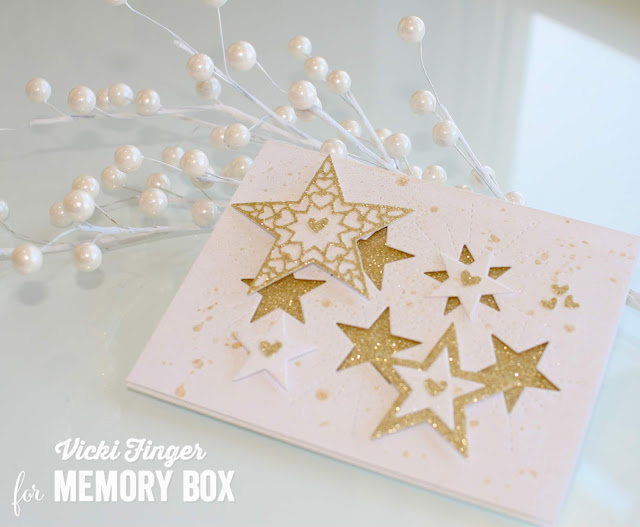 When I finished all of that, I still had a few little gold glitter hearts, so I grouped three of them and glued them directly to the card panel.  I think this is a fun card that could be used for a birthday card or a New Year's card as well, so I opted not to put a sentiment on at this time. 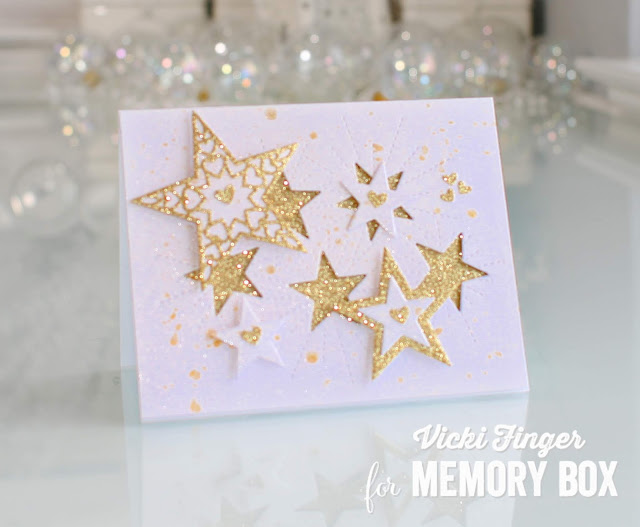 Each year for the last 18 years or so, some friends of ours in Dallas host a New Year's Party at their home, kids included.  I worked with both of them at the same telecommunications company and we were all working on Y2K stuff.  Bill now works at the same company as my husband.  While I was taking care of my grandson, Charlie, all the time before he started school, Andrea and Bill were having their first child whose birthday is just 10 days after Charlie's.  So Andrea and I spent a good deal of time together letting the boys play while we chatted.  Those boys turn 19 in January, and I worked with them a few years before that, so we have known each other for more than 20 years.  We really enjoy it!  We play Pictionary Guys vs. Girls and we girls always win!  There's a group of about 40 of us, maybe more.  I am planning on saving this card to give them on that occasion!

I hope you enjoyed this fun little change of pace card.  It was fun to sit down with a few dies in mind and see if I could figure out how to use them together.  Thank you so much for stopping by today.  Don't forget to comment for your chance to win one of the 12 prizes up for grabs during the Twelve Days of Holiday Cards!