Hello Everyone!  In my recent attempts to find other challenges to participate in, I came across one called "Color Throwdown".  They give you a color combination and you see what you can make that utilizes all of the colors shown in some way. The colors for this challenge are Pink, Light Green and Kraft.

I had recently purchased three cover plates off of a "For Sale Or Trade" thread on a forum.  I like all of the Papertrey Ink Cover Plates I have so far and the three I bought as a group were all ones I had on my wish list at Papertrey Ink.   I was pretty happy to get them for a discounted price. Today I wanted to play with the Cover Plate: Quatrefoil.

I started by misting a panel of Pink Cardstock with some Iridescent Gold Glimmer Mist from Tattered Angels.  This spray doesn't cover up a color, it merely enhances it.  While the pink is still pink, in the light you can see the beautiful iridescent shimmer.  I didn't capture that shimmer in the photo, but it's definitely there.  I love shimmer mists.  I have several although the Iridescent Gold and Tsukineko's Sheer Shimmer Mist are my two favorites.  I cut the cover plate from Gold Foil Cardstock and kept all the positive pieces from the die cut.  I used the cover plate with an embossing mat to deboss the design onto the pink paper and then adhered the gold die cut on top of that.  I popped up a few of the positive pieces on that panel using some Thin 3D Foam Adhesive from Scrapbook Adhesives.  I like to use the thinner foam sometimes as it makes for slightly easier mailing. 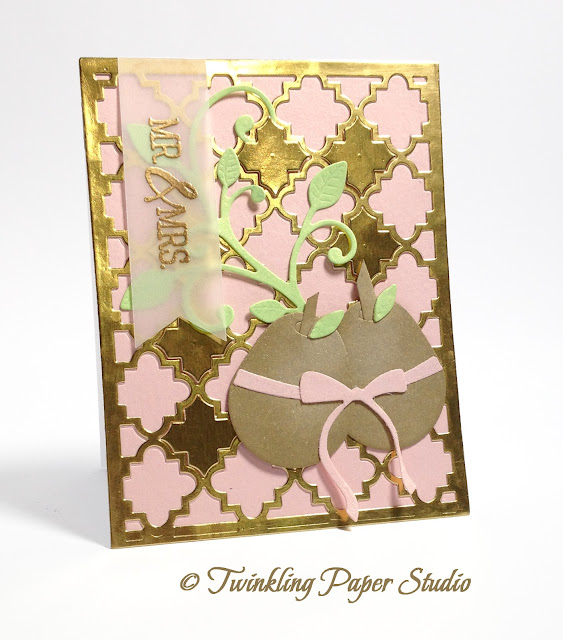 I wanted to send this to someone who is is getting ready to celebrate an anniversary so I chose the "Perfect Pear" instead of flowers.  The die I have is a Quikutz Revolution Die from several years ago. For the Light Green, I cut the My Favorite Things Leaf Filled Flourish Die to make a flourish out of some Creative Memories Cardstock in Honeydew.  This is really the only Light Green I have. Typically, Creative Memories Cardstocks don't work the best for card making as they are too thin, but this was exactly the color I needed for the flourish and it was such a small part of the overall design, so it worked.  For the final element on my card, I stamped the "Mr. & Mrs." from the Simon Says Stamp Congratulations Stamp Set onto vellum and heat set it using Simon Says Stamp Antique Gold Embossing Powder and cut the swallowtail end for that banner.  I like that it goes up and down instead of across.  I think you could also do something similar for a Wedding Card. 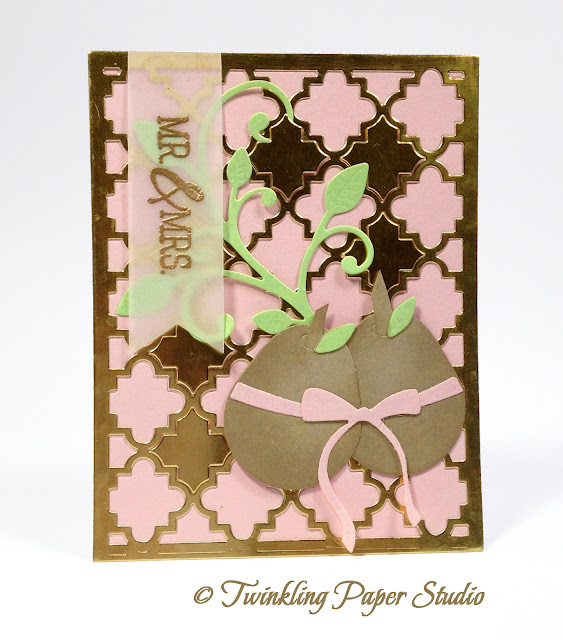 I hope you all enjoyed this Color Throwdown #381 Challenge Card.  I'll be linking this up over on the challenge which I linked at the top of this post.
Posted by Vicki Finger at 4:49 AM