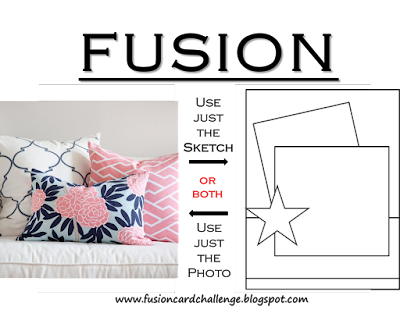 Lately I have been checking out some new blogs and new places to play along with the challenges they host every week or two.  Today is the first time I've actually done one of these challenges. I'm participating over at FUSION. The idea is that you can use the sketch, the image or you can "fuse" the two to create a new card or project.  I mostly do cards but I loved the colors in the photo, so I wanted to combine mine.


The first thing I noticed was the very Moroccan design of the navy and white pillow because I have some gold foiled paper that mimics a very similar design. So that was my starting point for this card.  Since my paper is foiled, I wanted to use some gold foiled cardstock for the main element of my card.  I also wanted to use this Text Block: Party Time from Papertrey Ink. I cut another one with some iridescent white paper and used those pieces to inlay the balloons with Ranger Multi Medium Matte.  I put a piece of vellum behind the text block so I would have something to glue the inlay to and once that was finished, I put some grey cardstock behind it. I tried a few different colors including the rich pink, but most of them seemed to steal the show rather than accenting it. 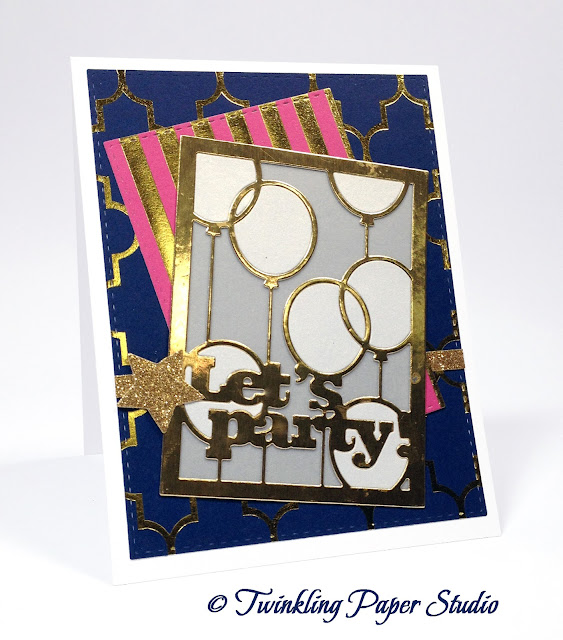 Using Simon Says Stamp Stitched Rectangles Dies, I cut the background panel from the dark blue & gold paper in the largest size and the mid ground panel from the pink and gold striped paper in the third from the largest size. I adhered the background panel to a Top Folding A2 Card Base then attached a skinny strip of Gold Glitter Paper for the horizontal line.  You could use twine or ribbon to accomplish the same thing.  I just happen to like a little bit of glitter.  Next, I attached the tall rectangle on top of that and the sentiment panel with the balloons.  I topped it all off with a glitter star on the left hand side just as shown in the sketch.

This was a super fast card to make.   I like that even though there are several layers, this card is flat enough for easy mailing.

Papertrey Ink has several of the Text Blocks available in a variety of themes and you can check them out here.  I hope you have a great day and great rest of your weekend!