Papertrey Ink March 2018 Create Along With Us 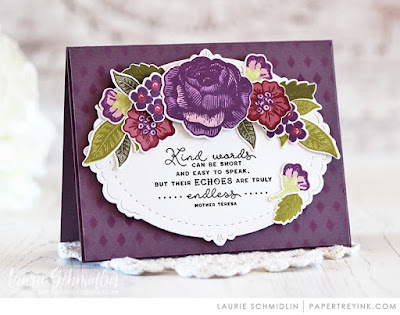 Hello there!  It has been several weeks since I was able to join in a challenge at Papertrey Ink but I really enjoy creating a project each month so I'm taking time out today from an incredibly busy schedule in order to participate.

I normally blog 3-5 times a week but right now, we are building a house in another state and are traveling back and forth every other weekend.  I have other things to do regarding the house and I am also the Designer in the Spotlight this month on the Simon Says Stamp Wednesday Challenge so I feel like that's where my blogging focus is right now.  It's important to me to do a good job when I'm invited to participate in those occasions.  I am definitely road weary but hopefully we will be in the house in about 6 more weeks. 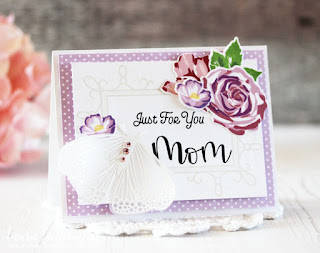 This month over at Papertrey's release week, I am ga-ga over all of the DT projects and these 2 cards in particular by Laurie Schmidlin. This card from a few days ago used Farmer's Market Florals and so that is the set I chose to use today.  I wish I had gotten the Diamond Stencil last month but it is definitely on my wish list after seeing Laurie's card from yesterday (above)  used a new stamp set that was introduced yesterday called Stitching Garden.  It's a set designed by Betsy Veldman and it will be available tonight at 9:00 p.m. Central.

I have primarily 3 brands of inks that I use on a day to day basis.  While I do have others, I don't have them in nearly as many colors as I do in these three brands. Papertrey Inks are the ones I reach for the most and I know these colors well and how they all work together if you want to use a layering set.  For today's card, I used Lavender Moon, Hibiscus Burst and Raspberry Fizz for the roses from Farmers Market Florals with some new leaf for the leaves. The purple flowers were done with a variety of Papertrey Inks and were a lot of experimentation to see what stamping one color on top of another would do.  I used Lavender Moon, Winter Wisteria and Amethyst Allure.  The small spray of lilacs were stamped in Lavender Moon and then had a bit of Winter Wisteria sponged onto the stamp as well.  I've used this stamp set one other time, but I was finding the rose hard to line up.  So I die cut several and played around until I was sure I was doing it according to the examples on the package.  Anytime I have trouble with a new layering set, this is what I do.  With this set it is not nearly as important to line up as I made it but I didn't know that until I had some that were lined up correctly so it pays to be a little neurotic from time to time.  No biggie if you don't have them lined up perfectly because they still look lovely.

Once I had several of each bloom stamped, I started trying to pull a card together.  Because Laurie had used a frame, I wanted to do the same so I reached for a staple in my studio, metallic gold cardstock.  Some might call it shimmer.  It's definitely different than the Gold Foiled Cardstock that I frequently use for sentiments.  The one I am using here is from Gina K Designs.  She also has silver but I haven't tried that yet.  I have lots of silver foiled cardstock and I don't need anything different than that.  I rarely use silver, but at Christmas and in the winter, I like to have the choice of silver vs. gold. True to form, I almost always like gold better but I like to keep my options open. 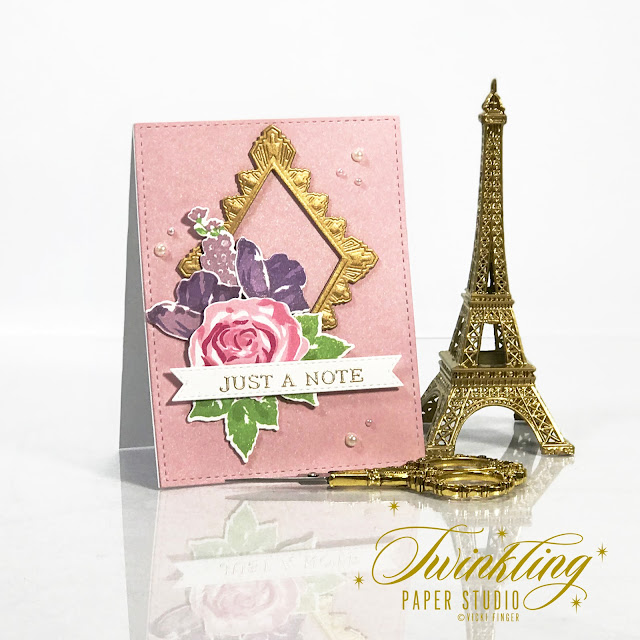 For the front panel, I die cut it from Lavender Moon Cardstock and hit it with some iridescent gold shimmer mist which is also a staple in my studio.  Once it was dry, I adhered it to a top folding cardbase made from Stamper's Select White Cardstock. Then I placed the gold frame using Thin 3D Foam Squares.  Once that was down, I arranged my flowers and used a piece of Press N Seal to pick up the arrangement and flip it over.  Using the same Thin 3D Foam Squares, I adhered the flowers to the frame. 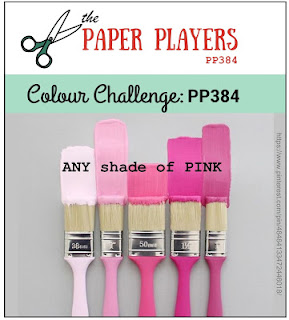 Using the "Just a Note" sentiment from Botanical Blocks, I stamped that onto a Tag Sale: Quilted banner of white cardstock using Versamark and heat set it with Antique Gold Embossing Powder. I attached that to the card front using foam squares on the ends but not in the center of the banner so that it would lay flat against the bouquet.  I added three different sizes of pearls to the front which makes for an ultra feminine touch.

Today's card will also be for The Paper Players Challenge #384 where our challenge is to use any shade of pink.  That is super easy for me as I frequently reach for the pink inks in my collection.

That completes my card for this month's Create Along With Us.  The supplies I've used are linked below for your convenience (Affiliate Links may be used).  Thank you so much for stopping by today!