Even though I did make a card today, I can't seem to get it photographed decently.  I guess the colors I selected are more muted and just not that vibrant and the sparkle I added seems to be not that evident either so this is a poor representation for the Simon Says Stamp Wednesday Challenge which is "Make it Sparkle".  Trust me, I'll try to do a better one.

I wanted something similar to a card I made previously but thought I would go for a more "Chic" look so I started by embossing this Hero Arts Peace & Joy Stamp using WOW! Metallic Platinum Sparkle Embossing Powder and cutting it out with the WPLUS9 Love Showers Tag Die.  I used Wisteria Wonder Card Stock from SU! and embossing the word "in" from the Winnie & Walter "The Big, The Bold and The Comfort" Set using the same embossing powder. The embossing appears to be just a dull grayish color, but it isn't!  The A2 card base is Bazzill Marshmallow Card Stock with the front embossed using a Design Objectives Embossing Folder.  It isn't as 3D as the Next Level Embossing Folders, but it is more than just a 2 dimensional look. 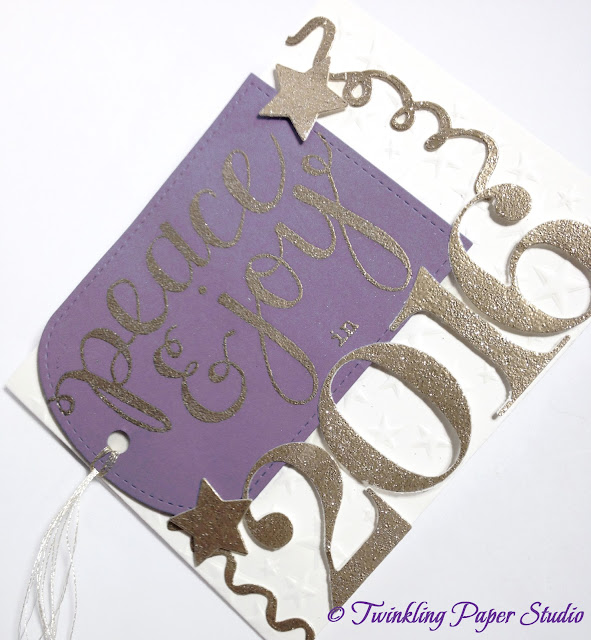 I cut the stars from some old QuicKutz Dies that I had, the streamers from the Taylored Expressions Raise Your Glass Die Cut Set and the numbers from a number set by QuicKutz called No. 73.  I put 8 strands of DMC metallic thread through the hole in the tag and did a slip knot.

To make sure the numbers matched as far as the color, I inked up a piece of scrap card stock using Versamark and put the same embossing powder over it and heat set it.  Then I cut my numbers. This particular color of embossing powder is a bit warmer than silver, so it was important to me to match it up and silver glitter paper just didn't do it.  Additionally, all of the paper was spritzed with Tsukineko Sheer Sparkle Shimmer Spritz.

To assemble the card I used a combination of Foam Squares and Ranger Multi Medium Matte. The tag and the bottoms of the numbers have foam on them while the top of the numbers have a bit of adhesive so they lay flat against the tag at the top.  The streamers are adhered with Ranger Multi Medium Matte as well. The stars are also a combination of foam squares and liquid adhesive.

Assembled, this card barely fits in the envelope and if I made it again, I would make it 4 x 5.5 to give it that extra bit of room.  This card is side folding and I don't like it as much as the top folding version I had made before.  But it's for my best friend and she won't have nearly as critical of an eye as I do.  She just enjoys getting the card in the mail.

Thanks for stopping by today.  I already have an idea for my next card so I'll see you all soon!  I'm going to have two of my granddaughters here for a few days this week before school starts again the next week, but I will be around.  Be sure to let me know if you have any questions and I'll answer them for you.