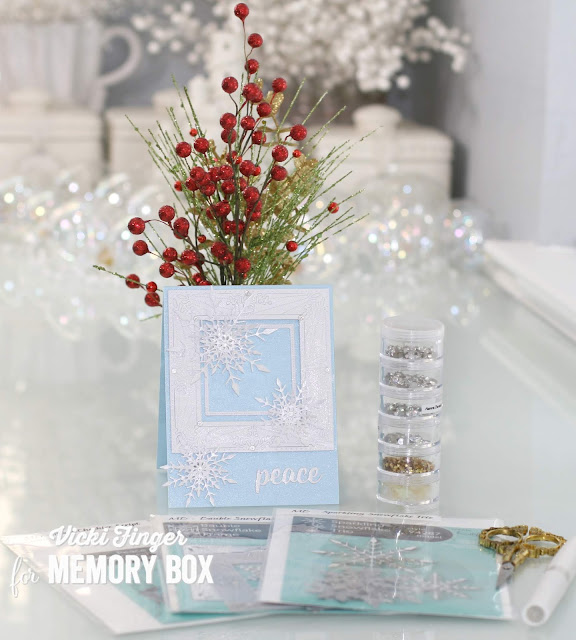 Hello there!  Today I have a card for you featuring some of the new Holiday 2019 Dies from Memory Box!  Given my love for shimmer and shine any time of year, you know that I had to use some of that on a winter snowflake card!  I started by misting up a couple of 4.25 x 5.5 card panels with clear shimmer mist.

I strongly considered using white on white for this card, but I wanted an "icy" color for the card base.  I chose Pearlized Powder Blue from PaperPapers.com.  Once my white card panels were dry, I die cut the Bauble Snowflake Frame Die from one panel and a couple of the smaller snowflakes from the Sparkling Snowflake Trio.  I mean, with "Sparkling" in the name, you know I had to do it.  With the other panel, I cut several more of the snowflakes so that I could layer them up on the front of the card and the inside of the card as well.  I could also have used a shimmer or metallic white cardstock but that paper doesn't give quite the same effect as the white card stock with shimmer mist on it.  These dies cut so well that I don't have any trouble popping them out of the negative. 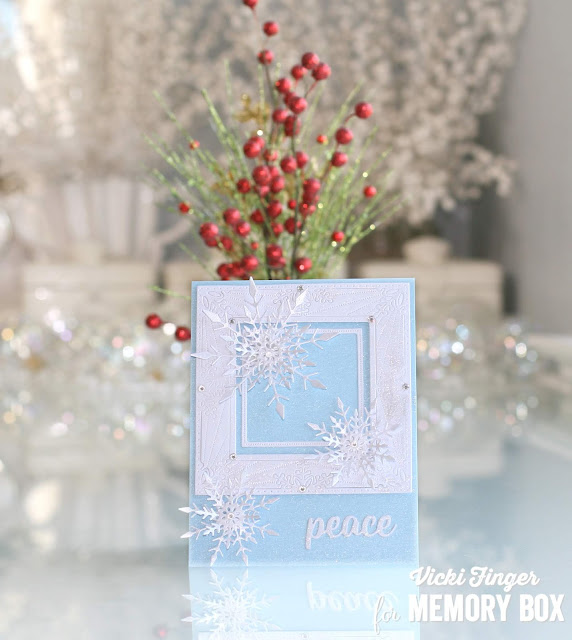 Memory Box Dies are made in the USA of 100% US Steel.  I don't know about you, but that is something that's important to me as a US Citizen.  They also cut beautifully, every single time.  I am not using a metal adapter plate, but as my cutting pads wear, I may need to add one to my die-cutting sandwich.  I do have a Gemini, but I feel faster cranking everything through my Cuttlebug. When I found out that the Cuttlebug was being discontinued, I bought a dozen sets of "B" plates and a couple of "C" plates.  Eventually, I will have to switch over, but I'm going to be fighting it every step of the way.

Once I had all the snowflakes die-cut, I started laying them on top of each other to see how I would group them.  I always like to put a sparkly little gem in the very center, so it was mostly a matter of what snowflake went on top of which other one. I pretty much always do the largest on the bottom getting smaller with each layer.  I also rotate the additional layers slightly to make it look like there are as many "branches" as possible together.  After I adhered them together at the centers, I laid them on a piece of white printer paper and Misted them yet again with the some Silver Iridescent Shimmer Mist.

After I set those aside, I grabbed the frame and used micropore tape all along the backside of it to keep the little pieces from falling out.  Then using my Tonic Nuvo Shimmer Pen, I went all over the front of the frame.  This gives the most sparkle possible but you need to be squeezing the brush a little the whole time to keep the product coming out.  I wouldn't really do it on something that was any larger because it would be pretty hard on your hands, but I wanted that super shimmery shine today.

After making my card base, I laid everything out on my card to decide how I wanted the layout to look.  I put foam tape all the way around the large frame and adhered it to the card base.  Next, I put Multi Medium Matte all around the small, skinny frame with the dotted detail and adhered it directly to the card.  I put gems around the larger frame at the inner corners and then at the center point on each outer side of the frame in the center of that side.  The detail in all Memory Box dies is just incredible and I have to say I love working with them. 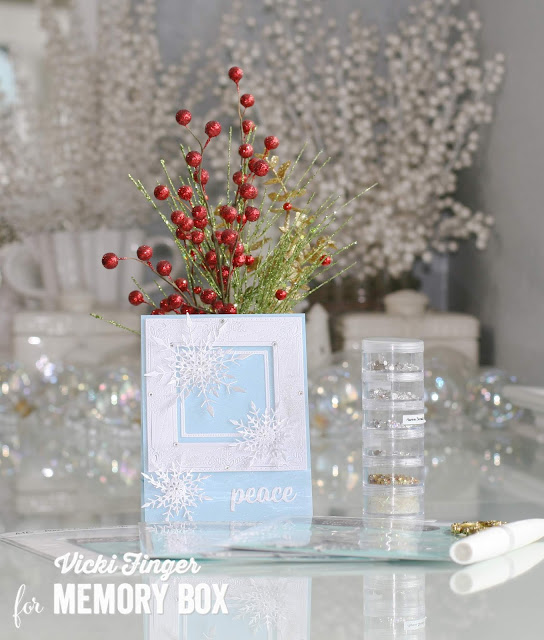 Normally, I try to block the sunlight from the afternoon hours by pulling down my blinds.  I hadn't quite gotten it done when I snapped this picture.  The sun had just gone a little behind a cloud eliminating the really dark shadows that come with full sun.

This is really simple to do as it is primarily assembly.  With a variety of small one-word dies to choose from, it's easy to put a card together.  You could do mass die cutting, and then sit in front of the television and do mass assembly if you wanted to.  I have so many projects and ideas to share right now, so I'll be back soon with another project to share with you. 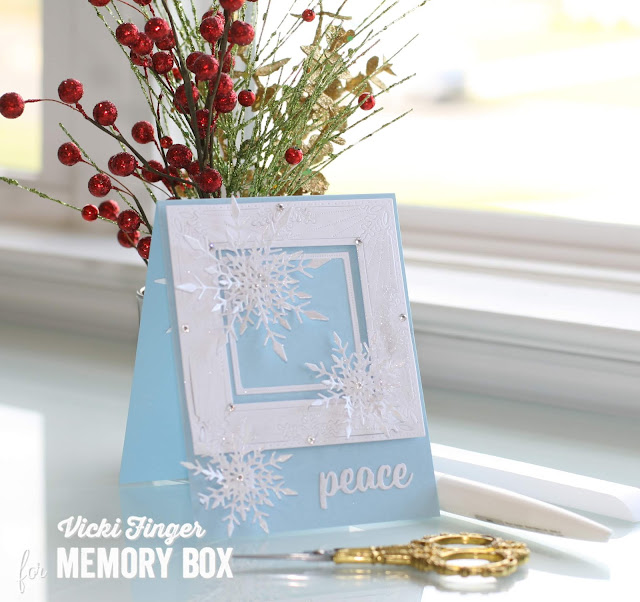 I'm trying to get better at remembering to take process photos for you, but there weren't really any in this case.  It was simple die-cutting and assembly.