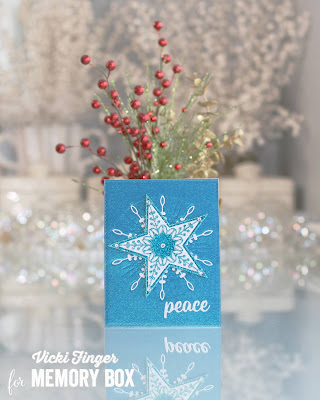 I have two Blog Posts today so if you're looking for the Keeping Christmas Blog Hop, you'll find it is the next one down.

I have a new project for you today featuring some fantastic items from Memory Box's latest Holiday 2019 Release.  I fell in love with this Chandele Star Die and knew I wanted to make it shiny & sparkly!  Those are my two favorite colors after all!  I also used the coordinating Chandele Snowflake Die to both die-cut and to dry emboss my background panel. Just FYI, this word is pronounced "shan-dell" just in case you are like me and want to make sure you are pronouncing things correctly. 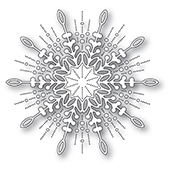 I have a huge bin of scraps that I try to use as often as possible.  I noticed I had one in a coordinating color that had been die cut and had also been heat embossed - ON THE WRONG SIDE!  This is exactly why I keep those scraps.  So I took the Chandele Snowflake Die and using an embossing sandwich, dry embossed the image into this scrap card panel of Peacock Metallic Cardstock. 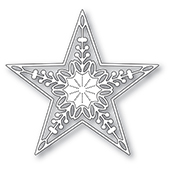 Then I die-cut the Chandele Snowflake from White Glitter Cardstock.   This die does cut each of the tiny dots and other pieces that are shown in the image, but I am just not that patient so I wanted only the white glitter snowflake to put behind the Chandele Star Die. 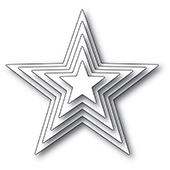 I chose a light pool colored glitter cardstock and die-cut the Chandele Star Die from that.  Then I used the Memory Box Shining Star Set to die cut a simple Star shape in the largest size to go behind the Chandele star and the next size down to cut one from white to go behind the die-cut Chandele Star. You'll probably have to open the image in a new tab to see the color differences, but I promise you it's there.  I definitely needed that White to make the glitter cardstock die cuts really pop.

I wanted to add a few simple embellishments, so I added a jewel in the center of the star and also at the pointed tips of the star.  I also chose to cut the "Peace" word die from the same white glitter cardstock.  I tried a few different colors and the white definitely was the right choice.  Who doesn't wish for a little peace around the holidays? 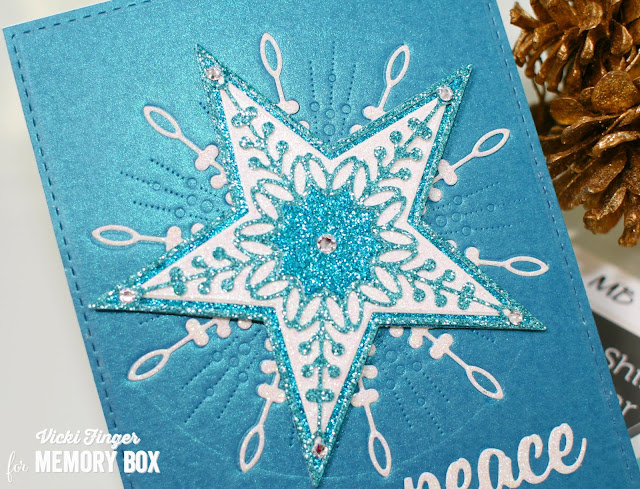 Originally, I had planned to line the star up in true North/South orientation, but when I was playing around with orientation before I adhered it, I liked it better in this "tipped" to the left version, which also does a better job of highlighting the Chandele Snowflake.  I used foam tape on the back-side of the snowflake to give it a little bit of dimension. 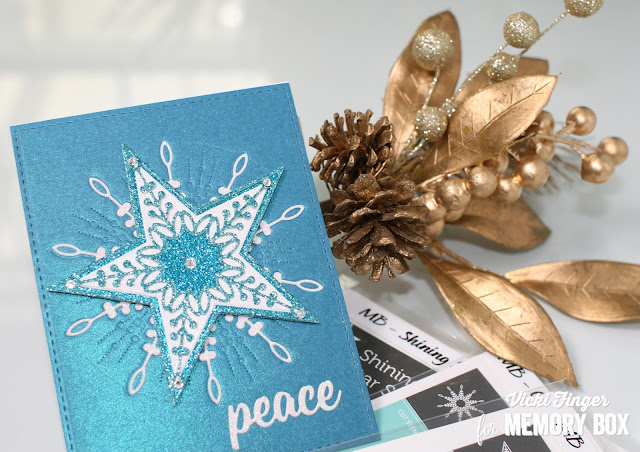 Between the Shimmer Cardstock, the Glitter Cardstock and the little gems, this card is absolutely breathtaking in person.

Thanks for stopping by today! I'll link as many of the products as I can below for your convenience and I hope you'll consider shopping through my affiliate links. I love it when you take the time to leave me a comment!