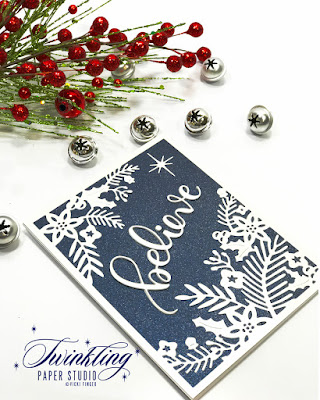 Over the course of the last year I have been on some Challenge Design Teams and through this, I've found a lot of other card makers whose work I really enjoy. One of the most recent people I found is Kelly Lunceford.  I just adore her work! When I saw that she is now designing for the Merry Monday Challenge, I just had to play along.

I must say, it took several tries for me to achieve the look I was going for but, I'm ahead of the Christmas Card "Game" now because I already have about 8 cards made, which is one of the reasons for Merry Mondays. This is a weekly year round challenge with the idea that if you make one card a week for the whole year, you'll have your Christmas Cards well started or maybe even finished by the time Christmas rolls around.  I make a lot of one-off's during the Holiday's so that I can showcase new products that have been released and since blogging and card making are my job, there are usually many Christmas cards shared here between now and the first week or two in December. 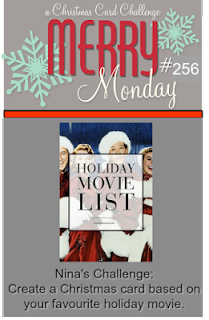 This week's Merry Monday Challenge is "Holiday Movie List" and the Movie I chose is "It Came Upon a Midnight clear".  As I said, I had several tries to get to a finished product I was happy with, not for the work itself but to clearly convey my movie choice.

Can't you just picture peeking out through snow laden branches in the deep, clear, still night and seeing the stars? There is something so magical about the stillness of a snowy night.  This card is incredibly simple in the design but a bit trickier to capture.  I still didn't get it nearly as good as I would like but sparkle is very hard to capture. In fact, I felt it was really only captured in my last card photo and even then, not very well.

For this card, I started with a Cover Plate: Winter Floral cut from White Shimmer Cardstock and a background panel of Night Sky Shimmer Cardstock.  I misted both with a heavy layer of Tsukineko Sparkle Sheer Shimmer Spritz and let them dry while I did some other things. Even though the paper is shimmery, it doesn't sparkle until you add the sparkle spritz. Once they were dry, I adhered them together with Ranger Multi Medium Matte.  I applied that to a top folding card base made from Stamper's Select White Cardstock.  I knew I wanted to use the "Believe" die from Simon Says Stamp (it was my favorite from last year) but I also wanted to be able to have an iconic symbol for Christmas in that night sky. It just so happens that Memory Box makes a die called "Star of Wonder", available from Simon Says Stamp and other retailers. 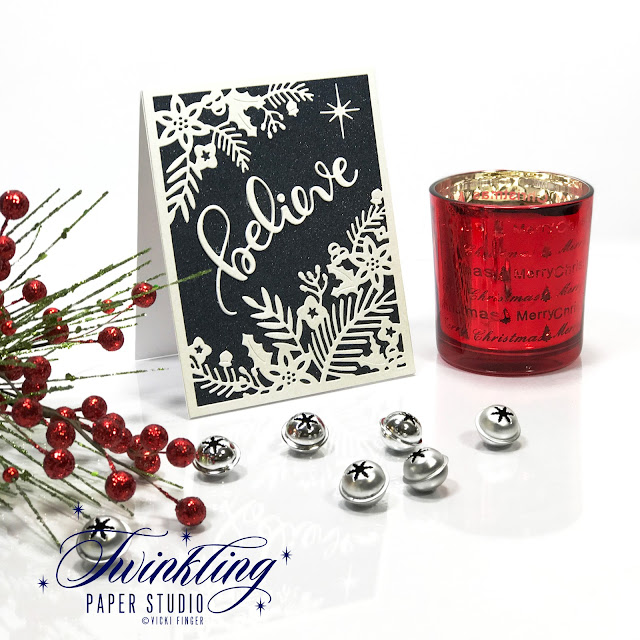 So as you can see, this design was very simple and easy to execute.  The hardest part was finding the right color and style of cardstock to really emphasize the sparkling white and starlit night.  If you look closely at the top photo, I think you will see the shimmer, I took a photo from that angle so that you could see a tiny bit of that sparkle.  It is truly stunning in real life!  Of course after I had this blog post all put together, I decided I need to add a gem to the center of that star, so I did, but I did not take a picture of it.

Thank you so much for stopping by today and I hope I've inspired you in some way.  As always, if you'd like to leave a kind and encouraging comment, I really appreciate them!
Posted by Vicki Finger at 1:40 PM