Simon Says "It's Hip to be Square"

The Simon Says Stamp Wednesday Challenge for this week is "It's Hip to be Square" and we are to showcase a Simon Says Stamp Exclusive product if we have one.  If you've been to my blog before, you know that my most favorite of all the Simon Says Stamp products are my Stitched Rectangles.  In fact, I'm starting to worry that because I use the largest size so often that I'm going to wear it out. I don't think that's possible, but I do use it a lot.  I just love the crispness of a die cut edge so I reach for it nearly every time. I even used it today for my square card because the center panel is a rectangle made to fit behind a large die cut.

I started by cutting the square design from a full sheet of the 12 x 12 gold foiled paper.  I just love this paper but it is sometimes difficult to include in my projects because I have to chop up the design in order for it to fit which I admit, bugs me. It's such a waste of beautiful paper!  The paper itself is from "My Mind's Eye Fancy That Collection" from last year and I have a few sheets left. Once I had the design cut down, it measured 5.75 x 5.75 so it was perfect for a square card. Because of the size, I used a sheet of Bazzill Marshmallow Card Shoppe paper in 12 x 12 size cut in half for my card base.  I still have a few sheets of this 12 x 12 size from when our scrapbook store closed last year.  Most of my projects utilize 8.5 x 11 inch cardstock but I do have a small amount of 12 x 12 paper for just such an occasion as this.  I like the Card Shoppe weight paper which is 100# card stock.  I also used my last piece of a heavy weight card stock in a color called "Shell" for this card as well and cut that with the largest Simon Says Stamp Stitched Rectangle.  I don't know what brand the paper is but it's a very nude or soft peach color tone that matched this patterned paper perfectly.

I wanted to use my new die from the Papertrey Ink August 2016 Release called Paper Clippings: Thankful For You. This die is very intricate and I had to cut it using my metal shim and running it back and forth through my die cut machine and then rotate the die 90 degrees and run it through again. In this way, more area of the cutting surface gets used and you are more likely to get a clean cut in just two passes. These large, intricate dies rarely cut on the first pass, so I've just learned to do them this way.  It's a lot less frustrating than trying to re-align everything back into the die for the second pass (says the voice of experience). 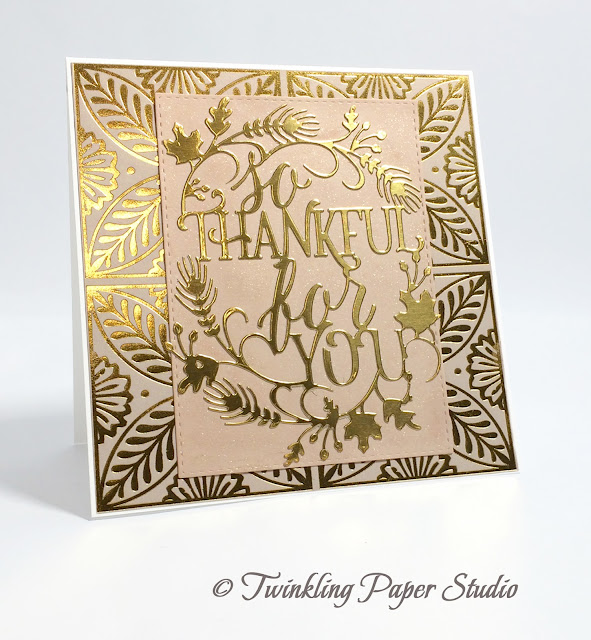 I was trying to make it easy to adhere the die to my card front for the size and intricacy of the die cut so I ran it through my largest Xyron sticker maker (5 inches wide) but in hindsight, this wasn't a good choice. Spray adhesive would have been a lot better or even just gluing it as I normally do.  It's okay though as I did get it.  I hadn't used my Xyron for a while and now I remember why.  I think it's all a matter of what you get used to and I'm used to my little bottle of Ranger Multi Medium Matte with the Small ScraPerfect Fineline No Clog Tip.  Lots of card makers out there use the top from the Quilled Creations bottle but I found that top didn't hold up to the constant on and off of the cap on the end and then would just get lost on my work surface. I went through two of them in a matter of weeks. The cap I use now has held up incredibly well and is the same price as the Quilled Creations cap. It's held up so well in fact that I got the Medium ScraPerfect Medium No Clog Tip for my Glossy Accents.  The pink one that came out at CHA this past January is too fine for how I use it and is very difficult for me to squeeze out.  As long as you put the needle top back in, there is no clogging.  If you would ever leave your cap off accidentally, you can run just the top under hot water until it's clean or you could soak it and then rinse it (says the voice of experience again).

So to recap, I used a 5.75 x 5.75 inch piece of the foiled patterned paper, (no longer available) my last piece of the Shell Cardstock to cut a 4 x 5.25 inch Stitched Rectangle, a piece of gold metallic poster board for the die cut and half of a 12 x 12 sheet of Bazzill Marshmallow Cardstock for the card base.

The thing that took the longest for this card was going all the way around the die cut on the Xyron with my smallest ended embossing tool before I took the cellophane off the top so that I wouldn't have any extra adhesive hanging off. I misted the Shell panel with Tsukineko Sheer Shimmer Spritz before I die cut it. I'm sending this with a few other things so it will be mailed in an 8.5 x 11 inch envelope, otherwise I probably would have made my card 4.25 x 4.25 to fit in a standard A2 envelope.  Since I knew I was going to be using a bigger envelope I went for the bigger size option.  It's fun to do something different occasionally!

I'll be entering this card over at the Cards Envy Challenge as well as the Double D Challenge with a "Neutrals" theme.

Thank you so much for stopping by today.  I truly appreciate and read each comment that you leave!  I'm off to work on a birthday card using the Garden Gate Kit from Papertrey so I'll be back soon.
Posted by Vicki Finger at 11:10 AM