Getting Back in the Groove of Things

Hello there!  If you've been here before, you might realize that I have not been blogging as much in the last few months.  At the very end of July and the first week in August, we met my husband's twin brother Wayne, and his wife (also named Vickie) at a car show in Louisville, Kentucky where they had two cars entered.

Fayne and I took our time traveling to get there as there was a stop we wanted to make along the way to a place we didn't make it to during our East Coast Swing Trip in 2014.  The first night we traveled just a couple of hours until we arrived at Texarkana, TX.  Fayne had worked all day and his day starts at 3:30 am when he gets up.  So by the time he gets home from work, he has already put in a 12 hour day.  So we didn't go too far.  The next day we planned to spend the night in the Nashville area so that we could visit the home of Andrew Jackson.  We stopped in Memphis along the way and ate lunch at Corky's Ribs and BBQ.  Hands down, the best ribs ever.  I grew up eating Kansas City BBQ, and then Texas BBQ, so I'm pretty particular.  I also like a dry rub, and no sauce, so I'm even pickier than lots of other folks because most people drown their barbeque in sauce.  And our waitress, Anita, kept us entertained and our thirst quenched with never-ending Arnold Palmers (Half Sweet Tea & Half Lemonade).  We had a great time and it was nice to do a somewhat leisurely drive.  It was our first vacation in 5 years, so we wanted to be able to take it slow.

With a car show that lasted four days, I knew I would spend a couple of those days in the hotel and not at the show so, in preparation for that, I die cut a bunch of new stuff from The Greetery and Gina K Designs, my Distress Ink Cubes, a Misti, and my Altenew Artist Markers and a few other things and tossed them into a large tote.  This worked amazingly well.  I had a variety of mediums to choose from and a variety of things to stamp.

When I first got home, I made several cards from The Greetery's Summer Sketches.  Since I haven't shared them on my blog yet, I'll share them here.

These cards use the same materials above except for the center card, which I gave my daughter for her birthday last weekend.  The center card uses a background paper that looks as if I watercolored it to match but I didn't. 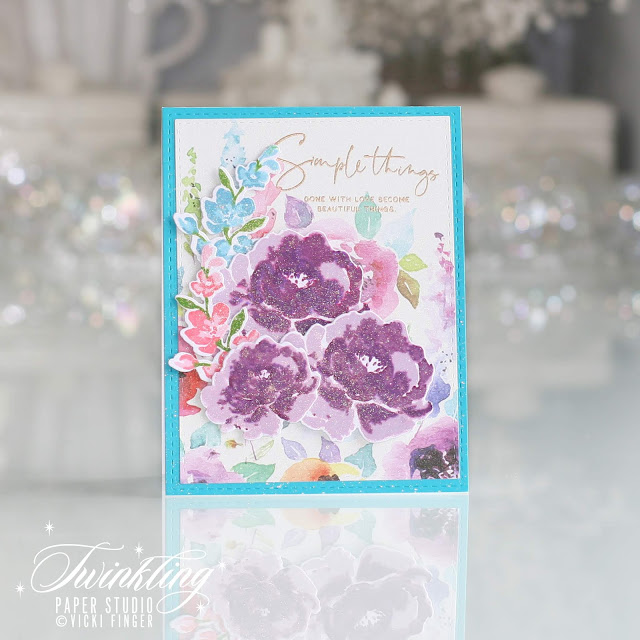 When I was stamping the blooms from The Greetery's "Fleur Impressions", I thought at the time that it would match perfectly with this paper from ModaScrap FLY & SCRAP 6x6 Paper Pack at Simon Says Stamp.  I could just "see" it in my head.  I was pretty tickled when I got home from Kentucky and put this card together, and it came out just how I visualized it.

Once I had that done, I started doing some sewing for my daughter's birthday gift, and from there, that snowballed into working on a gift for my Sisters-In-Law that will be in their gift bag for Christmas.  I can't show you those projects for obvious reasons, but trust me when I say that I have been on an absolute mission!  I'm way ahead of the game by now on the sewing, but that's also why I haven't been posting much.

Just as I was finishing my sewing on Sunday and trying to get my serger moved from the dining room table to the Portable Cutting Table that I use when sewing, I literally dropped my serger and it bounced onto it's "head".  Oh my - there were pieces scattered all over the floor, and my 5 thread serger would no longer hold any spools of thread.  The spool stand was broken in half, one of the corners of the machine was completely broken off, a few cuss words were shouted and I was about to burst into tears.

I should have asked my husband to move the machine for me because it is heavy, but I didn't.  The really sad part is that the factory where my machine was made in California, burned to the ground many years ago and you can't even get parts for it anymore.  Thankfully, my husband figured out a workaround that was better than super glue and was able to get the belt tightened back up, the spool stand back together with some bracing on the underside of it and it seems to be working without any issues.  It's not quite as pretty, but I've had it since 1993, so I'm reluctant to part with it.  Not to mention that a new one would be quite expensive.  Finally, last evening I had some time to sit and work with the rest of the elements I already had stamped and I also got a chance to play with a few new things from The Greetery; the Halfsies Oval and Diamond Dies. 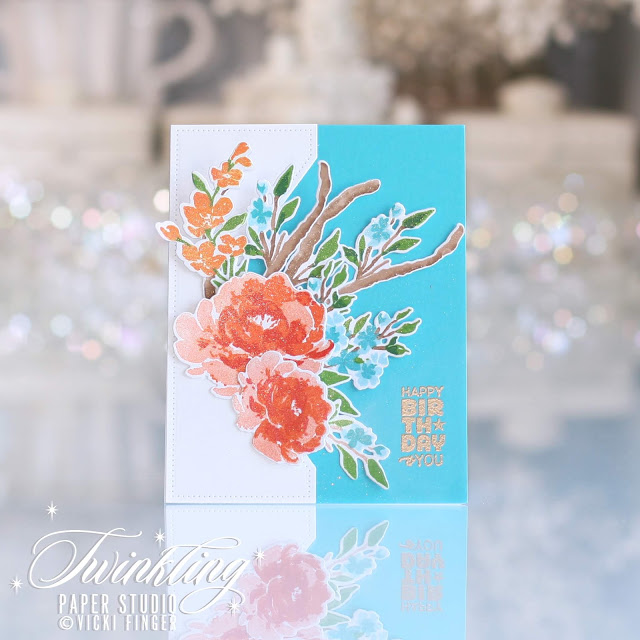 This card uses a combination of Fleur Impressions with the Blooming Branch.  I used just one of the Halfsies - Diamond die cuts with some Gina K Designs Blue Lagoon cardstock.  The pierced details are really nice. 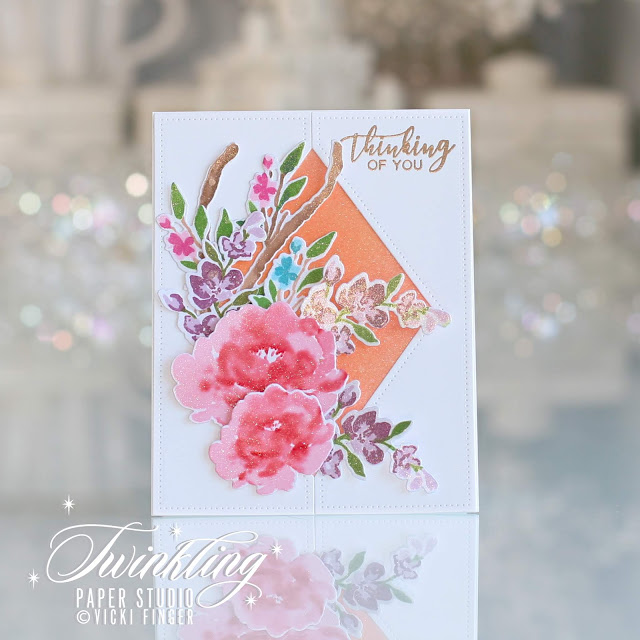 For this card, I used two of the die cuts to create a window.  For the background, I ink blended using my Tailored Expression Blending Brushes with Sunkissed and Rouge Inks from Altenew.  I misted it with gold shimmer mist and let it dry before attaching everything to that panel.  When working with the Halfsies, I like to use 1/8th-inch ScorTape along the long edge to keep the edge secure while I am tucking things into it.  This has worked great for me. 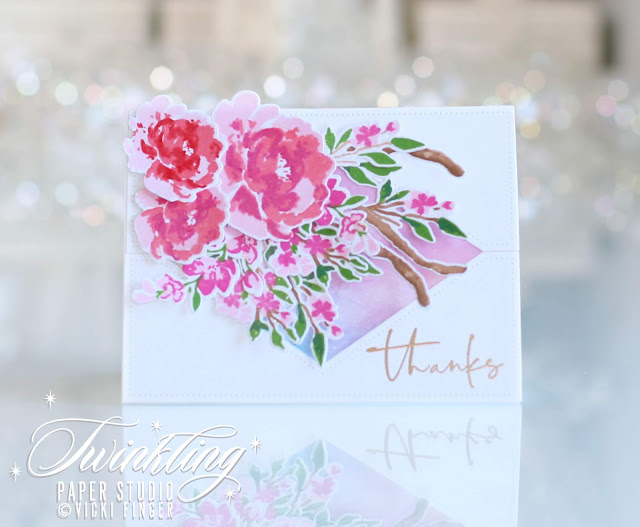 This card uses another of the patterned papers from the same Moda Scrap Collection for the background behind the window. 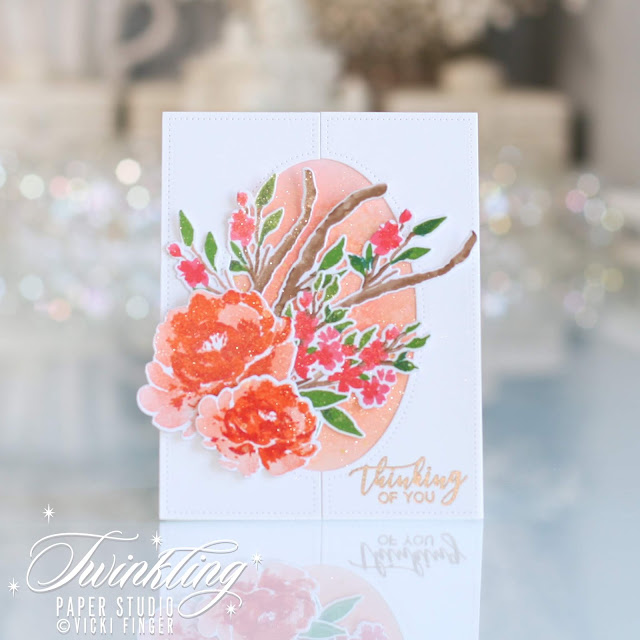 This is another ink blended background using Coral Berry with just a touch of Sunkissed. 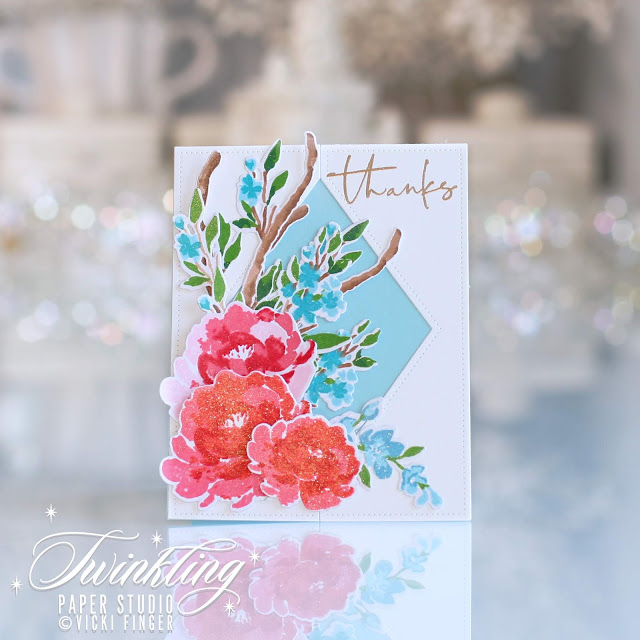 For this card, I used a card base made from Gina K Designs Ocean Mist Cardstock with the Halfsies: Diamond, Blooming Branch, and Fleur Impressions.   Because all of my elements were already stamped, I could just sit and pull pieces together to create the arrangements.  This morning, I stamped the sentiments on each card.  I really love Betsy's simple style of greetings.

Now that most of my Holiday sewing is done, I am back in the studio and I will have lots of new projects to share with you.

I had a very bad fall in Nashville, before we ever got to Kentucky, so I just needed to take care of myself for a little while and take a break.  I cut up my knees pretty badly and because I am allergic to Neosporin, didn't use any type of triple antibiotic ointment on my injuries.  Needless to say by the time we got back, I had developed an infection and then had to do a course or oral antibiotics.  I'll have the scars for many years to come I am sure.  I appreciate your understanding of my taking a break. 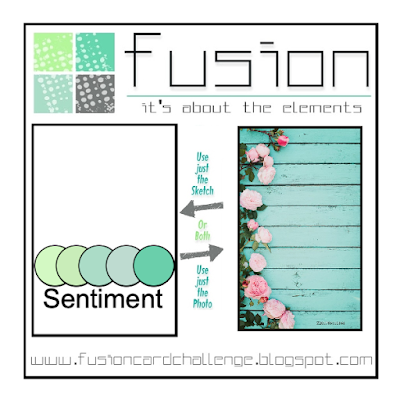 Because I am finally back in the studio, I am even going to enter at least one of these cards over at the Fusion Card Challenge.  I hope you'll pop in with a card of your own to share!

Thanks so much for stopping by today!  I hope you'll take the time to leave me a comment!
Posted by Vicki Finger at 9:59 AM