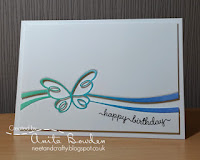 For my card I started with a 4.25 x 5.5 inch panel of Canson Bristol Watercolor Paper.  I love to use this for most of my card front panels because of how well it works for so many techniques such as the one I used here, Ink Blending.  The blend is far superior to anything I could do on cardstock, no matter how high the quality is. The Bristol Paper is smoother and takes color very well in addition to being able to stand up to the shimmer mist.  I started by using the Simon Says Stamp Snowflake Border Die to impress or emboss the design into my card stock.  You can do this by using an Embossing Sandwich in your die cutting machine.  It will emboss rather than cut. I also die cut three of the borders from Stamper's Select White Cardstock so that I could I put those together, stacking one on top of the other using a bit of spray adhesive between each layer. I keep a shallow box in my studio for just this purpose so I don't spray adhesive all over. This makes for a nice thick embellishment. Once I had that done, I gave it another coat of spray adhesive and sprinkled Nuvo Pure Sheen Glitter in the color Diamond all over it and set it aside to dry while I continued on my project. 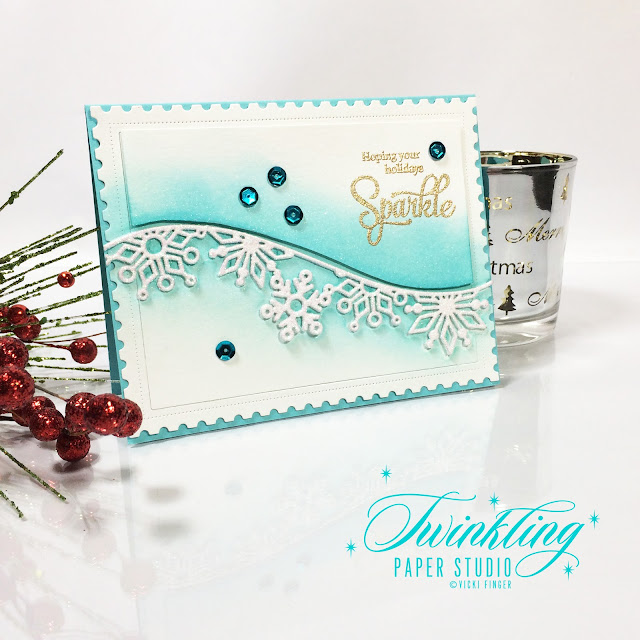 Taking my embossed front panel, I did ink blending using Cracked Pistachio and Mermaid Lagoon Distress Inks all along the embossed area, letting it blend out very softly. Next, I die cut the panel with the largest Avery Elle Postage Stamp Die which gave it the decorative edge, but I kept the paper in the die while I took it to my desk and adhered the center panel to the frame using a bit of Micro-pore tape. You can use Washi Tape, Scotch Tape or whatever.  Micro-pore is what I had handy.  I just wanted to keep the center rectangle with the frame for this card. Next I used the Simon Says Stamp Snowflake Border Die on an extra rectangle to cut the top wavy piece so that I could pop it up on foam tape for added dimension.  I'm going to have to think of a better way to explain this.  I guess I should have taken some pictures along the way. It's just an extra interior rectangle piece from another project and I used it for the underneath piece so that I could pop up the top layer that had the ink blending on it. Clear as mud I'm guessing.  I'm planning to use this technique again soon on another project and I will try to take pictures along the way so you can see what I mean.  I wasn't sure it would work while I was making this card, but in real life, it is just gorgeous. You may be able to see it better in this image. 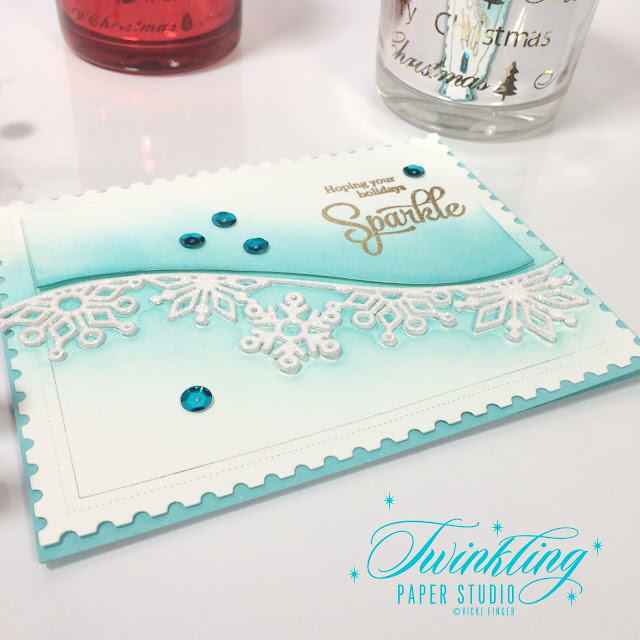 Once I had that done, I heat embossed my sentiment from the Sparkle & Shine: Holiday Additions Mini Stamp Set with Ranger Gold Tinsel Embossing Powder and assembled the card onto a top folding card base made from Simon Says Stamp Audrey Blue Cardstock. This is one of my absolute favorite colors. The front of the card got all all over spritzing with Tsukineko Sheer Shimmer Spritz and then I was able to set the glittered die cut snowflakes right into the impression that I had previously made using the embossing sandwich.  If I would have kept it one layer, it would have fit down inside and been flush but it pops up because I had the extra layers for thickness.  I finished it off with a few turquoise sequins!

Thank you for stopping by to see my project today and especially if you take time to comment on my post.  I have a very busy few weeks ahead with the holidays and family, but it's my goal to still have at least 3 new posts per week until I leave for CHA in January.  It's just a month away now and I am getting super excited.
Posted by Vicki Finger at 2:06 PM