Simon Says For a Special Lady/Girl 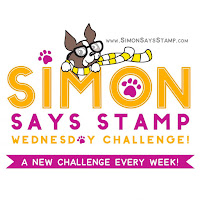 It has been a few weeks since I've had time to play over at the Simon Says Stamp Challenges but I jumped right on the Wednesday Challenge this morning.  I did one of my favorite things which is to mix and match my supplies; inks, stamp sets, dies, paper, etc.  I love to create without restrictions on which product I can use.  Thankfully, Simon's sells most brands.  I know they are featuring Penny Black products this week and I have a few of those to do yet before the week is up but for today, I just want to use this set from a new company called "The Stamp Market".  Last month was their first release and I just love this stamp and die bundle. 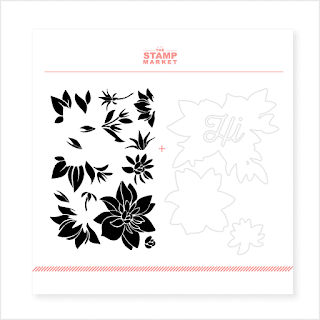 I started by stamping the greenery with Simon Says Stamp Beanstalk Green Ink. There are small stamps to stamp the buds in a separate layer. Then you can cut that layer with the die. I cut three in total so I could stack them up for a chipboard effect. Shading was added using a YG63 marker.  For the buds and bloom I chose Altenew's Ocean Waves Crisp Ink and added some shading with a BG01 Copic Marker.  I mounted one bloom directly to the top of the greenery then added another on top of that with Thin 3D Foam Squares for a bit more dimension. This has been so well thought out and I hope to see similar sets in the future. I detest masking at least as much as fussy cutting, so this kind of set is awesome for me.  I also stamped the smallest flower and stem on the left hand side of the envelope to match.  I have a specific person in mind to send this card to, so while I already had my supplies out (as Jennifer McGuire, Yana Smakula, Nichole Heady or a gazillion others would say) I went ahead and did a little stamping on the envelope. 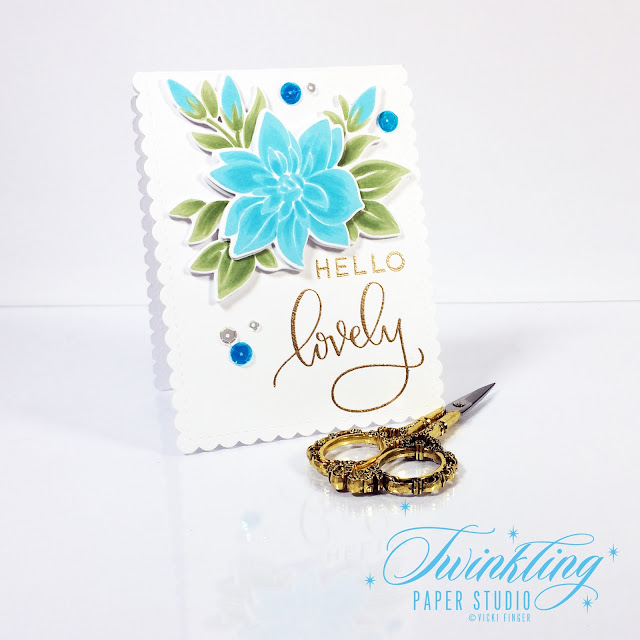 This card is for a friend who definitely needs a boost of moral support right now so I loved adding the greeting from the Concord & 9th "Hello Lovely" Stamp Set and a few sequins to add just a touch of bling!

As a side note, I finally ordered a few of the Distress Oxide Inks after seeing Tim Holtz's CHA Demo and they will be here by the end of the week.  It's a little bit difficult to find them in stock anywhere right now.  I got 9 of the 12 that were released and found them at Scrapbook.com.  If you haven't seen them in action, be sure to search "Distress Oxide" at Jennifer McGuire's website. There's a link on the right hand side bar of my blog.  It's Wednesday, so for many of you the work week is half over. Have a great afternoon everyone. I hope you'll come back soon.
Posted by Vicki Finger at 12:38 PM